God love our American cousins and their relatively recently-found enthusiasm for the Beautiful Game.

Yep, the last few years have shown us that football (soccer) is finally catching on across the pond. 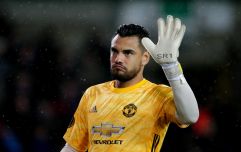 END_OF_DOCUMENT_TOKEN_TO_BE_REPLACED

Internationally, their women's side are world champions and, while their men's side aren't, they still managed to outperform England during the last World Cup with a squad made up of many players that wouldn't get a game in the Premier League.

Major League Soccer also continues to grow, too. With David Beckham still working away on his Miami-based team, newly-formed Atlanta United are days away from making their MLS bow.

Understandably, Atlanta-based football (soccer) fans are quite excited that they'll not have to venture a few hundred miles out of their city to watch an MLS game. So excited, they've already made a chant to welcome their new team, bless 'em.

Now as much as we'd love to praise them for going to such great lengths, we simply can't.

To our knowledge, the first ever football chant featuring the lines "You better watch your mouth" and "We're gonna stomp you out."

If ever there was a case for the MLS to introduce relegation, this song is it.