In the aftermath of the news that Sergio Aguero will be leaving Manchester City at the end of the season, the club announced that the Argentinian would be getting a statue outside the Etihad alongside club legends Vincent Kompany and David Silva. 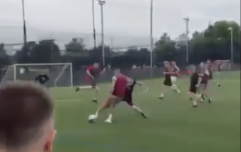 END_OF_DOCUMENT_TOKEN_TO_BE_REPLACED

Very few City fans would argue that Aguero is deserving of being immortalised in bronze. Not only has he been one of the greatest strikers in the club's history, but he has arguably been the best Premier League player of the last decade, and is right up there in the debate around the best forwards in the history of English football.

However the announcement has led some to question why Yaya Toure, another key figure in the club's success over the last 10 years, has not received the same honour as Aguero, Kompany and Silva. The Ivory Coast midfielder scored the only goal in the 2011 FA Cup Final that ended the club's 35-year wait for a trophy, was the driving force behind City's Premier League triumph in 2014, scoring a remarkable 20 goals that season, and as a result was voted their player of the year.

Where is Yaya Toure's statue. pic.twitter.com/gFGU85gY0B

seriously: no one player did more to make City a force in English football than Yaya Toure.

Kompany, Aguero and Silva outlasted him, and are legends in their own right, but Yaya should be first in line for a statue. https://t.co/ywgwp4CFyP

Toure's contribution has not been ignored by the club. He has a pitch named after him at the club's training ground, and mosaic honouring him. The likes of Pablo Zabaleta and Joe Hart have had the same honours bestowed up them.

But this pales in comparison to having a statue outside the stadium. Some have wondered whether Toure's race has played any part.

Wait, Manchester City are going to make a statue of Sergio Kun Aguero outside the Etihad Stadium, my question is, where is the statue if Yaya Toure? Without Yaya Toure, there is no Manchester City, or is it because he is African? 👀 pic.twitter.com/B0E1mBBfO0

However others have pointed out that the manner of his exit tainted his image. One user tweeted that "unfortunately he burned his bridges with a lot of City fans with his behaviour off the field and some of the statements he's made during and after his time at the club," and another said that the player "burned his bridges with City." Who can forget the birthday cake controversy?

But when you look at the stats, and think back to how dominant Toure was in those early years of City's recent success, it is difficult to argue that he hasn't been one of the most influential players the club has had. In that 2013-14 season he was unstoppable, and was one of the greatest midfielders in the world.

How are these 3 getting a statue before Yaya Toure? https://t.co/W61tKIVVex


If there’s one player who deserves a statue outside the Etihad, it’s Yaya Toure. Definitely Yaya Toure.🤞🏾

It seems as though the mosaic will have to suffice for Toure.