Fallon Sherrock made history after she became the first woman to reach a televised PDC final but suffered defeat at the hands of three-time world champion Michael van Gerwen at the Nordic Darts Masters.

END_OF_DOCUMENT_TOKEN_TO_BE_REPLACED

After a sensational comeback win in the semi-finals - rallying from 10-6 down to beat world number five Dimitri Van den Bergh 11-10 - Sherrock became the first ever woman to reach a televised PDC final.

Although the 'Queen of the Palace' led 6-3 in the final, van Gerwen produced a vintage display to secure his 16th World Series crown with an 11-7 victory.

Last year, Sherrock became to first woman to win a main-draw match at the PDC World Championships - before she was defeated in the third round.

OMG what a night…… absolutely buzzing despite not winning - so proud of myself 😎. So many emotions I’m speechless. Thank you to EVERYONE and I mean EVERYONE. Congrats to @MvG180 - I can see why your the best now 🙈😂😂😂😂- thank you Denmark you were amazing ❤️ pic.twitter.com/xEc5KVTxNN

"I'm so proud of myself, especially to push Michael as much as I did," Sherrock said on ITV4. 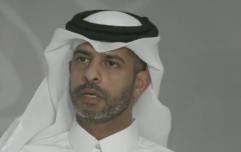 END_OF_DOCUMENT_TOKEN_TO_BE_REPLACED

Van Gerwen made it to the final after an 11-7 victory against Jonny Clayton in the semi-final and despite adding another trophy to his collection, the win in Copenhagen is Van Gerwen's first title in 10 months.

"I have waited so long for this win," said 'Mighty Mike'.

"Fallon played a phenomenal tournament. I think she played one of the best games of her life in the final."

When the crowd in attendance began to chant Van Gerwen's name, the Dutchman began to get emotional

"I have been through a really tough period and this means so much to me," he stated.