It's probably just two old friends catching up for a coffee, but football fans love to speculate about the sensational.

Carles Puyol hung up his boots at the end of last season, but MLS fans have gone wild after seeing the former Barcelona captain in New York with one-time team-mate David Villa. 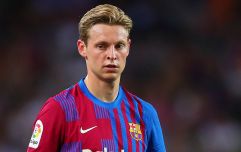 END_OF_DOCUMENT_TOKEN_TO_BE_REPLACED

It wouldn't be the first time a top player has come out of retirement for one last hurrah, and not even the first time one of the players from the 2009 and 2011 Champions League finals has done the deed.

And fans of New York City FC, for whom Villa top-scored this season, are optimistic that Puyol will follow Paul Scholes' lead and make a shock return to football. 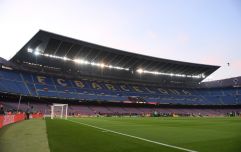 END_OF_DOCUMENT_TOKEN_TO_BE_REPLACED

The MLS newcomers had the joint-worst defence in their debut season in the competition, so an experienced head at the back could certainly come in handy.

But a backroom role might be more likely. The managerial hotseat is currently vacant after Jason Kreis' departure, and while Fabio Capello is the frontrunner, could a league without relegation offer the perfect chance for Puyol to cut his teeth as a manager?

popular
Travis Barker’s daughter shares picture of Blink-182 star in hospital bed - tells fans to ‘send your prayers’
Bette Midler wants the US to ban Viagra because it’s ‘God’s will’ to have a ‘limp d**k’
July heatwave: When to expect hot weather and how long it will last
Fans shocked after Machine Gun Kelly smashes glass on his face during performance
British teen says she was raped in Majorca hotel by 'famous actor and musician'
Police hunt for two 'laughing' men who kissed three-year-old girl in front of distressed mum
Father takes his own life after 18-month-old found dead in hot car
You may also like
Sport
Manchester United 'reject Barcelona's attempt to sign captain Harry Maguire'
Sport
Barcelona to relocate to new stadium while Camp Nou undergoes redevelopment
Sport
Frenkie de Jong 'clears out locker' ahead of Man United move
Sport
Lucy Bronze joins Barcelona on a free transfer after leaving Man City
Sport
Gerard Pique fires back at Barcelona after being told he has no future
Next Page