It's probably just two old friends catching up for a coffee, but football fans love to speculate about the sensational.

Carles Puyol hung up his boots at the end of last season, but MLS fans have gone wild after seeing the former Barcelona captain in New York with one-time team-mate David Villa.

END_OF_DOCUMENT_TOKEN_TO_BE_REPLACED

It wouldn't be the first time a top player has come out of retirement for one last hurrah, and not even the first time one of the players from the 2009 and 2011 Champions League finals has done the deed.

And fans of New York City FC, for whom Villa top-scored this season, are optimistic that Puyol will follow Paul Scholes' lead and make a shock return to football.

The MLS newcomers had the joint-worst defence in their debut season in the competition, so an experienced head at the back could certainly come in handy. 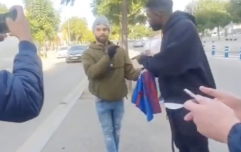 END_OF_DOCUMENT_TOKEN_TO_BE_REPLACED

But a backroom role might be more likely. The managerial hotseat is currently vacant after Jason Kreis' departure, and while Fabio Capello is the frontrunner, could a league without relegation offer the perfect chance for Puyol to cut his teeth as a manager?