James is a doubt for table-topping Everton

Everton are likely to be without James Rodriguez for their visit to Southampton this weekend - after the Colombian was injured by Virgil van Dijk.

The Liverpool defender was clattered by Jordan Pickford in the early stages of the Merseyside Derby last weekend, suffering a grade three tear of his anterior cruciate ligament which is expected to keep him out for months.

Prior to that, however, Van Dijk had fouled James, who now appears to be a serious doubt for Everton's game at St Mary's as a result.

Despite managing to complete the game at Goodison Park, the former Real Madrid midfielder has struggled during the week.

"Unfortunately, James had a problem during the game," Ancelotti explained.

"He had a mistimed tackle with Virgil van Dijk at the beginning of the game and I think he will not be available for the game against Southampton."


James Rodriguez is out of Everton's game vs Southampton after being injured in a tackle with Virgil van Dijk. 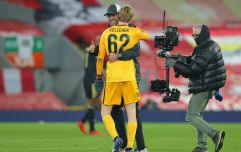 END_OF_DOCUMENT_TOKEN_TO_BE_REPLACED

Everton are top of the Premier League table as they head to the south coast having made an unbeaten start to the new season.

The draw with Liverpool was the only game the Toffees have failed to win during the early weeks of the campaign, with James playing a key role in their impressive form.

popular
The JOE Friday Pub Quiz: Week 220
QUIZ: Can you match the Harry Potter quote to the character that said it?
A definitive ranking of every swear word from worst to best
QUIZ: Guess the football stadium from the photo
'Time traveller from 2030' passes lie detector test over future predictions
Boxer Ryan Garcia bets $100,000 on Conor McGregor not being able to knock out Jake Paul
Kaka calls out Sunday league player who told him to 'cut it back'
You may also like
Sport
Liverpool defender Andy Robertson calls for consistency in use of VAR
Sport
David Alaba's agent to hold Chelsea talks over defender's free-transfer
Sport
Jurgen Klopp has spoken to Mo Salah about his conduct after positive Covid-19 tests
Sport
Liverpool's next away kit looks set to be a throwback to a 90s classic
Sport
Mido criticises Mo Salah for attending brother's wedding after contracting Covid-19
Next Page