Everton are flying high right now. Three wins from three. Third on goal difference. James Rodriguez shining on the pitch. Carlo Magnifico in the dugout. There are many reasons to be optimistic for the Toffees right now. And to celebrate reaching such heights - and with such swagger - their fans got popular Everton tune Spirit of the Blues to the top of the charts.

The idea came from FinKitch before other blues quickly caught on and began streaming and downloading the song that successfully getting the song to number one in the charts.

One of the men who wrote the song, Kenny Parry, told Evertonfc.com: “I was sat at home on Sunday not feeling great, then I got a call from Billy asking if I wanted some good news.

“He told me we were number one. I didn’t believe him. I am floating now.

“It is surreal and difficult to take in."


To celebrate the feat and to capitalise on their current wave of success, the media team at Everton decided to make their own music video for the song. 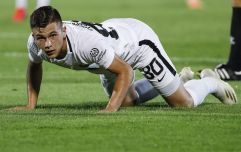 END_OF_DOCUMENT_TOKEN_TO_BE_REPLACED

The video combines 1980s style visuals, with clips of players doing silly dances in front of a green screen, and clips of their boys in blue banging in goals this season.

It's a great watch, unless you're a Liverpool fan. But even then, you're literally champions, let them have this moment.

🎬 | By popular demand... the 'official' music video to a 35-year-old song that you've suddenly lifted into the charts. #SpiritoftheBlues, indeed!