What a signing this would be

Marco Silva only has three and a half weeks remaining to complete his business before his first season in charge of Everton, and he's eager to bring in more attacking flair.

Everton's main issue going forward last season was a lack of width in attack, with Yannick Bolasie ruled out for most of the season and the need to fit Gylfi Sigurdsson and Wayne Rooney into the same team. That was somewhat adressed with the arrival of Theo Walcott in January, and Silva is hopeful of adding more quality this summer.

Having grown frustrated with the lack of progress in their pursuit of Crystal Palace's Wilfried Zaha, Marco Silva has turned his attenti0n towards Bordeaux winger Malcom.

Talks between Everton and Bordeaux chairman Stephane Martin to discuss the potential transfer of the Brazilian are scheduled for this week, according to The Mirror. The deal is likely to cost Everton around £30m in transfer fees and £80,000 per week in wages. 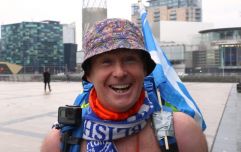 Speedo Mick: Walking Britain in his swimming trunks for charity

END_OF_DOCUMENT_TOKEN_TO_BE_REPLACED

Malcom's arrival at Goodison Park would push Yannick Bolasie further towards the exit door. Bolasie started well at Everton but a knee injury that kept him out for a whole year has seen him drop down the pecking order.

Everton are reportedly keen on sending Bolasie on loan to Turkish club Feenerbahçe, but the 29-year-old is settled in the United Kingdom and would rather not have to move across the continent.

Everton's pre-season got off to a flying start, as they won 22-0 against ATV Irdning. Although that result should probably be taken with a pinch of salt, given that they are a seventh tier side in Austria.


popular
Jadon Sancho to Manchester United transfer believed to be very close
It was Pierre-Emerick Aubameyang's final but Emiliano Martinez's moment
A must-see Jurgen Klopp documentary on Channel 4 this evening
Antonio Conte likely to leave Inter Milan after just one season
Footballers to be sent off for coughing on an opponent under new rules
How to find out which restaurants near you are participating in Eat Out to Help Out
The JOE Friday Pub Quiz: Week 202

You may also like
Sport
Liverpool, Everton and Curtis Jones' confidence
Football
What is 'Everton'? A series of questions, answered
Sport
Jurgen Klopp's contagious mentality is creating a generation of Liverpool winners
Sport
Confidence in football and why strikers feed on it
Sport
Liverpool, Duncan Ferguson and Arsenal's managerial search
Next Page