Juan Carlos Valeron was no spring chicken when he helped lead Deportivo La Coruna to the Champions League semi-finals back in 2004.

But more than a decade on, the former Spain international is back in La Liga with Las Palmas, and came on in the away defeat to Barcelona.

At the age of 40 years and 101 days, he joined just a handful of players in featuring in the Spanish top flight in their fifth decade.

Valerón came on to be fifth-oldest La Liga player ever (40y 101d). Leader is still an Englishman, Harry Lowe, who played for Sociedad at 48. 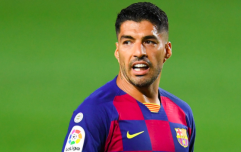 END_OF_DOCUMENT_TOKEN_TO_BE_REPLACED

Strangely enough, two of the others in the club are goalkeepers who had brief spells in England - former Spurs back-up Cesar and one-time Manchester United reserve Ricardo.

And perhaps even more bizarrely, another fortysomething to have featured in La Liga this season, Donato, did so in the same Depor line-up as Valeron himself.


popular
Furious Julian Nagelsmann accuses Angel Di Maria of diving for crucial PSG penalty
Meghan Markle reveals that she suffered a miscarriage during the summer
Bruno Fernandes explains why he let Marcus Rashford have penalty
Mike Tyson and Roy Jones Jr won't be allowed to knock each other out
Marcelo Bielsa joins Klopp and Flick on FIFA men's manager of the year shortlist
Can you get more than 12/15 in this childrens' TV quiz?
Zlatan Ibrahimović objects to use of his likeness in FIFA 21

You may also like
Sport
O Fenômeno: The story of Ronaldo's brief but brilliant whirlwind at Barcelona
Football
Valencia erect statue of blind fan in his seat to honour his memory
Sport
Leeds United player under investigation as part of La Liga match-fixing probe
Sport
Gerard Pique reveals his brilliantly childish way of trolling Madrid's journalists
Sport
Zinedine Zidane made three demands to return to Real Madrid
Next Page