Evander Holyfield says a trilogy fight with Mike Tyson is 'close' to happening. Holyfield made the comments during an episode of the Last Stand Podcast, and said the fight would occur in late 2021.

END_OF_DOCUMENT_TOKEN_TO_BE_REPLACED

Despite their advancing years, both men are targeting another venture into the ring this year. 54-year-old Tyson recently fought Roy Jones Jr in an exhibition match that ended in a draw.

Holyfield, 58, is believed to have been inspired to make a comeback by his former nemesis. Holyfield last fought in 2011, when he knocked Brian Nielsen out in the third round.

Evander Holyfield and Mike Tyson last met for the WBA World Heavyweight Title on June 28, 1997 in Las Vegas, Nevada. The fight was stopped in the third round and Tyson was disqualified for biting Holyfield's ear. (Photo by Focus on Sport/Getty Images)

He officially retired in 2014, but in reality had hung his gloves up long before.

Both Holyfield and Tyson share a storied history stretching back some 37 years.

Ahead of the 1984 Olympics, both men vied for places in the USA amateur squad. Holyfield was successful but Tyson missed out, losing on points to Henry Tillman, who would go on to win gold for the United States that year. 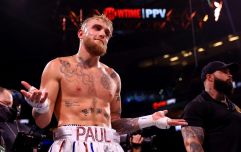 END_OF_DOCUMENT_TOKEN_TO_BE_REPLACED

Both men then turned pro and first met in 1996. Holyfield was billed as being past his best even then, but defied the odds to stop Tyson in the eleventh round.

In their hotly-anticipated rematch, Tyson was infamously disqualified in the third round for biting a chunk out of Holyfield's ear.

Now, 24 years after they last met, a third instalment seems increasingly likely. At least, that seems the case if you consider Holyfield's comments on the Last Stand Podcast.

Holyfield was asked by host Brian Custer if he believed a third fight with Tyson was likely.

"I would say yes," he replied.

Holyfield certainly appears to be keeping himself in great condition, if you pay attention to his recent social media activity.

popular
Bookmaker received $420,000 worth of bets on controversial Arsenal yellow card
New Highway Code rule will fine drivers £1,000 for opening door with wrong hand
Motorcyclist dies in crash live on TV while trying to escape police
Woman who saved enough to retire by 26 reveals three golden rules she stuck to
Dermot O’Leary stunned by definition of ‘grassilingus’ sex term
Southampton could remove statue of club 'legend' over evidence he ignored paedophile coach
Fitness expert reveals army technique to fall asleep in two minutes
You may also like
Sport
Evander Holyfield still wants to fight Mike Tyson despite first-round TKO
News
Logan Paul reckons he could 'easily' beat Mike Tyson in a boxing match
News
I can't keep quiet anymore, I am a Dominic Cummings Stan
Sport
Mike Tyson and Roy Jones Jr won't be allowed to knock each other out
Fitness & Health
Mike Tyson looks in the shape of his life ahead of comeback fight against Roy Jones Jr
Next Page