British and Irish Lions prop Kyle Sinckler has apologised after he was arrested in the early hours of Sunday morning in Auckland, New Zealand.

The Lions players went out on the town in New Zealand after six weeks of intensive training and ten gruelling matches Down Under ended with a drawn series.

END_OF_DOCUMENT_TOKEN_TO_BE_REPLACED

None of them had as interesting a time as English scrummager Sinckler, however, who ended his night with an arrest in Auckland.

The night started well for Sinckler, toasting the tour with Jack McGrath in the Lions dressing room while looking slick in his team suit. 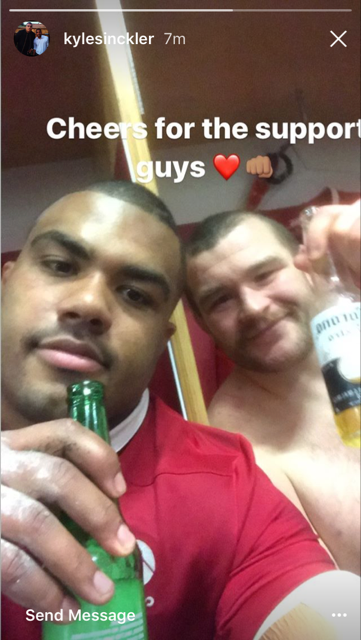 It obviously didn't end as well.

END_OF_DOCUMENT_TOKEN_TO_BE_REPLACED

The 24-year-old tighthead has carved out a reputation for himself as a useful impact sub but one that was confrontational with the All Blacks.

At times, on the pitch, he overstated the fire and brimstone approach, which resulted in an angry exchange with English team-mate in Owen Farrell.

Sinckler was like a spoilt child being held back by his parents 😂😂 pic.twitter.com/HCnwoSlBzw

Auckland police said a man was placed under arrest but not charged following a "minor disorder". Sinckler commented:

"I apologise for putting myself and the Lions in this position.

"I also apologise to the police and anyone else affected."

Lions tour manager John Spencer confirmed to the BBC that the Harlequins tight-head had apologised and was reminded of his responsibilities.

Spencer said in a statement: "We have been informed by Auckland police about an incident involving Kyle.

"I have spoken to Kyle and reminded him of his responsibilities as a Lion, which extends to his off-the-field behaviour."