All the bad vibes of early 2018 are being washed away.

Eddie Jones appears to have guided his England side through a storm and, on the other side of a damaging losing losing streak, they are on the up again. For Ireland, whom they beat on Saturday, they have slipped back.

END_OF_DOCUMENT_TOKEN_TO_BE_REPLACED

Going into the 2019 Guinness Six Nations, Ireland were seeking to be the first country since France, over 20 years ago, to record back-to-back Grand Slams. It would be far from easy but doing it would also put them in line to overtake New Zealand as world number one.

Having defeated Steve Hansen's men back in November, the summit was within touching distance. On Saturday at a strangely sombre Aviva Stadium, Ireland were ripped back towards the chasing pack.

England bossed Ireland for most of an attritional, kick-heavy game and were out of sight, leading 32-13, until John Cooney's late try made the final score look closer than it looked. England got the rub of the green when Maro Itoje avoided a sin-binning and a Henry Slade pass was not called forward but Ireland could only have themselves to blame.

"Yeah, that is a reality check, that's how it's going to be. That's why England are such a, literally, a big team.

"They did really well tonight. it's hard to take anything away from England. The intensity they brought to the game, it was more a simmering physical intensity that they collectively delivered that made it a suffocating place to be out on the pitch."

END_OF_DOCUMENT_TOKEN_TO_BE_REPLACED

A further dose of reality will arrive on Monday when the World Rugby rankings are officially updated. Ireland's defeat sees them lose 1.79 ranking points, and they are now over three points back from the All Blacks. England leapfrog Wales into third place while the French plummet continues. 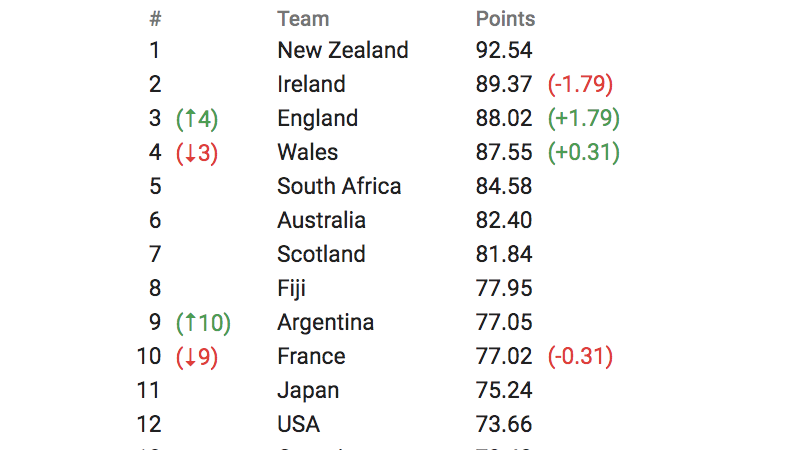 England have now won five of their last six Test matches and are the new tournament favourites, just shading Wales. France have now dropped to 10th in the world after coughing one up to Wales in Paris, on Friday.

Next up for Ireland are seventh place Scotland. An Irish loss in Edinburgh would cost them a further 1.45 rankings points and, should they beat France, see them overtaken by England.

popular
Lisa Kudrow hits back at fans complaining about lack of diversity in Friends
James May 'hospitalised after crashing into wall at 75mph filming new show'
Landlord faces £40k fine after tenant puts swimming pool on roof of flats
Ex-teacher who got pregnant by former student plans to film birth so it can be taught in schools
Robin Williams' wife shares reason why he killed himself
The JOE Friday Pub Quiz: Week 307
Furious Reading and Leeds ticketholders demand refunds as band replaces Rage Against The Machine
You may also like
Sport
Springboks star Faf de Klerk knocked out after horror collision with All Blacks winger
Sport
"He’s shown true courage" - Wallabies captain Michael Hooper backed for brave mental health decision
Sport
New Zealand has unearthed a rugby star that is a breath of fresh air for the sport
News
Rugby club leads tributes to 'nicest lads you could find' after horror crash claims three lives
Sport
Four England stars make final cut in 'World Class' squad selection
Next Page