Memphis Depay is a man in need a of a hug.

The forever PSV winger has endured a tough time in the Premier League for the club but has done much ebtter in England since his major summer time move from Holland. 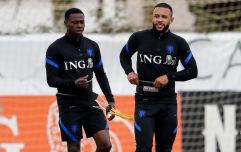 END_OF_DOCUMENT_TOKEN_TO_BE_REPLACED

Life in England appears to have taken its toll on the winger, but help may be at hand in the form of Arjen Robben.

Fellow Dutch international Robben has offered his support, recalling his own similar experience after signing for Chelsea over a decade ago.

The Bayern Munich man feels Memphis has the talent, but that mentally he needs to prove he's ready for life in the Premier League.

"Of course I will give him advice. We try to help each other as players and the team to make steps," Robben said.

"He is a talented player in a difficult situation, I can give him advice but the player has to cope with it, show strength and the right mentality."

"It is important in your development as a player, it is not always sunshine, you have difficult periods, especially when you are young."

"He has long way ahead and if he shows the right mentality, the talent is there. If he keeps working hard I am sure he can succeed," he said.