The app is part of the 'Football belongs to everyone' initiative

The Dutch Football Association (KNVB) have today launched an app that allows football fans to report incidents of racism anonymously. The app was inspired by Kick It Out's equivalent in the United Kingdom.

END_OF_DOCUMENT_TOKEN_TO_BE_REPLACED

The app, called Discrimination Alert, can be used to send reports of racism in or around the football field to the KNVB.

Its launch is part of the the Dutch government's 'Football belongs to everyone' initiative that involves the KNVB, Eredivisie CV, Keuken Kampioen Division and Women’s Eredivisie.

The initiative was launched a year ago today after an incident in November 2019 during a match between FC Den Bosch and Excelsior.

Excelsior's Ahmad Mendes Moreira was racially abused by fans in the stadium, prompting the government to allocate €14 million towards tackling discrimination in football.

If a fan in attendance at a professional game uses the app to report an incident of racism, the stadium coordinator is immediately alerted, and they will then work with the stewards working at the game to identify the culprit.

In amateur football, reports go to Discriminatie.nl. The KNVB receives an overview of incidents and can pass reports onto the Secretary of the Special Prosecutor for Discrimination.

"We have the idea of ​​the football reporting app from England," the Dutch Ministry of Health, Welfare and Sport reports. 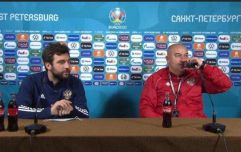 END_OF_DOCUMENT_TOKEN_TO_BE_REPLACED

"As soon as the public is again welcome at football, we hope that everyone will use the app and report discrimination and racism in football in the stands or along the line. Reporting is so much easier and that makes the investigation more effective."

Eric Gudde, director of professional football at the KNVB, said: "In the event of an incident, everyone wants to it be punished quickly and severely.

"In the Netherlands we have a legal system where you must be able to prove someone’s guilt before you can punish them.

"That is no different in football with the disciplinary system or stadium bans. It is therefore important that a report is made so that we can intervene or start an investigation."

popular
A definitive ranking of every swear word from worst to best
GB News fans cancel Specsavers because they hate cancel culture
Women aged between 18 and 50 told not to drink alcohol by World Health Organisation
North Korea is running out of food as a bunch of bananas 'now costs $45'
Here's how to see who's been taking screenshots of your Instagram Stories
Russian manager goes against Ronaldo and drinks bottle of Coke at press conference
Paul Gascoigne reckons he was a better player than Foden even when he was drunk
You may also like
Sport
Christian Eriksen to be fitted with heart starter device after cardiac arrest
Sport
ITV revisit Highbury tunnel incident, but viewers feel Keane asked wrong question
Sport
Rafa Benitez 'on the brink' of being named Everton manager
Sport
Why bother holding it in the corner to waste a bit of time when you're Gareth Bale?
Sport
How Roberto Mancini rejuvenated a weary Italy from their lowest ebb
Next Page