Dramatic footage emerges from inside the bus attacked by Conor McGregor

If Dana White thought cans of Monster were bad...

Conor McGregor has done his popularity among his fellow fighters absolutely no good whatsoever following a frenzied attack on a bus on Thursday afternoon.

McGregor arrived in Brooklyn and quickly made his presence felt as he and his sizeable entourage attempted to lay siege to one of the coaches which was transporting several fighters from the media day at the Barclays Centre back to their hotel.

Clearly unhappy about claims that he is set to be stripped and that the winner of UFC 223's main event between Khabib Nurmagomedov and Max Holloway will be the new UFC lightweight champion, 'The Notorious' set about the bus which was reportedly carrying Nurmagomedov.

This quickly got out of hand https://t.co/lPqTlkcgnV 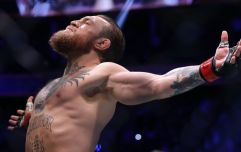 END_OF_DOCUMENT_TOKEN_TO_BE_REPLACED

As folding chairs and guard rails were hurled at the bus, security tried to fend off the Irishman's posse but McGregor's crew managed to cause damage to the vehicle, as well as one of the fighters within.

Michael Chiesa, who is scheduled to fight Anthony Pettis on Saturday night, sustained cuts from broken glass and footage captured by Karolina Kowalkiewicz coach Emil Grzelak provides the best angle of the attack.

Despite early reports that McGregor was arrested by New York Police Department officers for the attack, JOE can confirm that that is not true at the time of writing.