Time for an update on the weirdest football story of the week.

Ex-Liverpool striker Djibril Cisse has been released from police custody after being questioned as part of an investigation into the possible blackmail of France midfielder Mathieu Valbuena.

The 34-year-old former France international was one of four people placed in custody on Tuesday as part of the investigation. 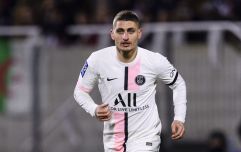 Marco Verratti has over £2.5m worth of valuables stolen while on holiday

END_OF_DOCUMENT_TOKEN_TO_BE_REPLACED

The case reportedly revolves around an alleged sex tape featuring Lyon midfielder Valbuena which, according to AFP, is in the possession of the other three individuals involved.

Former QPR, Auxerre and Sunderland player Cisse is currently playing his football on the island of Reunion for JS Saint Pierroise.