This is true, apparently. Hand to God...

Pro Evolution Soccer 2017 was released on Sony, Microsoft and PC systems in September last year, and one of the reasons why football fans keep returning to the game is the MyClub mode that allows players to take control of all-time favourites. 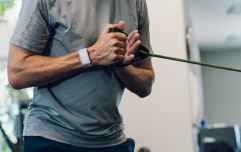 END_OF_DOCUMENT_TOKEN_TO_BE_REPLACED

Maradona's own on-field career came to an end 20 years ago, but he is the latest of the playable "legends" added to the game, alongside the likes of Ronaldinho, Hristo Stoichkov and Gary Lineker.

However, Maradona claims he never gave game-creator Konami permission to use his name or likeness in the game.

"I heard yesterday that the Japanese company Konami uses my image for its game PES 2017. Unfortunately, my lawyer Matias Morla will initiate the corresponding legal actions. I hope this is not another scam..."

Roughly translated, Morla states: "PES 2017 illegally used the figure and name #Maradona. We will action against #Konami with everything!"

There has been no official reaction from Konami on the subject at the time of publishing.

popular
Lovely Bones author apologises to exonerated man who spent 16 years in prison for her rape
Omicron symptoms: What you should be looking out for
Scotland international rugby star Siobhan Cattigan dies aged 26
Ronaldo comments ‘FACTS’ on fan boy Instagram post criticising Messi’s Ballon d’Or win
Pilot claims Prince Andrew was on Epstein plane 'Lolita Express' during Maxwell trial
Leeds condemn homophobic chanting aimed at Crystal Palace's Conor Gallagher
QUIZ: Who plays here? Match the clubs to these 50 stadiums
You may also like
News
Musk sets out UN conditions for $6B Tesla stock donation to end world hunger
Life
Mark Zuckerberg has been teaching his daughter to code since age three
News
People are baffled why billionaire Zuckerberg uses a bottle of BBQ sauce as a bookstand
News
Woman 'has proof' extra iPhone cameras are fake
Sponsored
Everything you need to take your streaming set-up to the next level
Next Page