The Chelsea striker has been the subject of a currently ongoing transfer saga linking him with a move to the Chinese Super League, which would make him one of the world's best paid players. 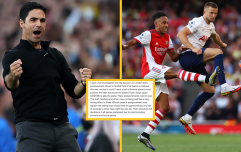 END_OF_DOCUMENT_TOKEN_TO_BE_REPLACED

The rumour first reared its head in January, when the outspoken forward had a falling out with Blues boss Antonio Conte and outlets suggested that Costa's representatives were in China to negotiate the player's move.

It wasn't to be and Costa remains an integral part of Chelsea's title bid, leading the goalscoring charts with 15 to his name this term, but the rumour simply won't disappear.

The most recent suggestions about Costa's future claim that a deal is in place which will see the Spanish international leave Stamford Bridge this summer and begin earning £30 million a year.

Spanish journalist Manu Carreño announced on radio show The Rail that talks have advanced to the point that the move is "total" and "absolute".

And rather than speculate about the legitimacy of Carreño's sources, we have an update directly from the horse's mouth.

Costa took to Instagram on Friday afternoon to rubbish the reports by writing "They talk too much shit. Come on Chelsea!"

So, he's going nowhere then?