It's safe to say that regardless of nervy we might be feeling as fans, the vibe around the England camp is as positive as we've ever seen it. The players are a day away from making history but they still have time to lift up the nation both on the pitch and off it. END_OF_DOCUMENT_TOKEN_TO_BE_REPLACED

Speaking to BBC Radio 5 Live Sport's Emma Saunders on the 'Daily Euros' show, Declan Rice was kind enough to give the presenters and those listening to a rousing rendition of Neil Diamond's 'Sweet Caroline'.

He didn't exactly have to be talked into it either - the Kingston lad was well up for it. We'd say he'll get some pelters for his boy Mase here he was just off camera and there's no way he can deny it: it's just brilliant. Take it away, Dec!

We christened the Daily Euros tent with a 'Live Lounge', so it was only right we closed it with one 🎶

The song choice? Well, it could only be one...

END_OF_DOCUMENT_TOKEN_TO_BE_REPLACED

Declan Rice has been immense alongside Kalvin Phillips in the middle of the park but this might be his best performance yet. We'd be well up for a karaoke night with this wholesome king. Someone will have to do 'Rice, Rice, baby', though, yeah?

An American track though it may be, 'Sweet Caroline' has long been synonymous with English culture and merriment; after the scenes against Germany and then Denmark, it's almost like the country refound its affection for what has almost become the unofficial anthem of the Three Lions' Euro 2020 journey.

You only had to see how emotional Harry Kane looked hearing the England fans in the round of 16, let alone the unbelievably spirited chorus of hearing them sing along with the players after they reached the final.

Get the sound on right NOW! 🔊 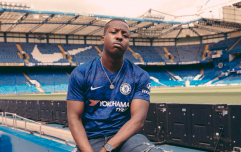 END_OF_DOCUMENT_TOKEN_TO_BE_REPLACED

In terms of the unreal memories this song now has attached to it, it's sure to go down as an all-time favourite. The debate will go on forever over what's better: 'Three Lions', 'World in Motion', 'Vindaloo'. How about we all just accept they're all on a par with each other and England has the most belters out of any national team? Yeah? Sorted.

Speaking of which, to get you in the mood/tide you over until tomorrow, we've put together a playlist of the best England tunes to get on the speaker ahead of the Euro 2020 final.