David de Gea's career could have taken a very different trajectory were it not for Gianlugi Buffon's loyalty, a former Juventus coach has revealed.

Buffon was linked with a move away from Turin when the Bianconeri were demoted to Serie B in the midst of the Calciopoli scandal in 2006, and goalkeeping coach and former Juve keeper Michelangelo Rampulla was among those tasked with scouting for a potential replacement.

"It was not known if Buffon would stay in Serie B," Rampulla - who is now working with Luiz Felipe Scolari in the Chinese Super League - told Gazzetta Dello Sport.

"I was given a list of possible replacements, and the very first was the Spaniard De Gea, then very young."

At the time, De Gea was yet to make his Atlético Madrid debut but had impressed at junior level for Spain.

De Gea's age and lack of experience at the time suggests Rampulla's list was not for an immediate Buffon replacement but rather for a future first-choice stopper if the former Parma man had chosen to leave. 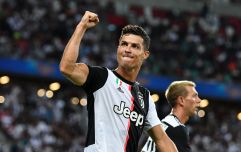 END_OF_DOCUMENT_TOKEN_TO_BE_REPLACED

Juve ended up signing Emanuele Belardi during that transfer window, but Buffon's decision to stay meant the former Reggina man saw his time in Turin limited.

De Gea's name has been linked with the Italian club again, as a potential new number one when Buffon, now 38-years-old, does eventually retire.

However, Rampulla suggested Juve would likely prefer to bring in another Italian goalkeeper, with Milan's Gianluigi Donnarumma and Udinese's Simone Scuffet the two leading targets.