'Easiest money he's ever made'

David Beckham earns more money from his contract with FIFA 21 than he ever did as a player, the Mirror are exclusively reporting.

The former England captain features on the new EA Sports game as an 'icon', having negotiated a £40 million deal over the course of three years with the game developer.

A source told the Mirror: “FIFA makers EA Sports offered him £30million over three years but he managed to get a better deal.

“It is a big addition to the Beckham brand and the easiest money he’s ever made.”

Beckham commented on his presence on the game, posting on Instagram:

“I’m so proud to be returning to EA Sports with my FIFA 21 Beckham Edition cover.

“Excited to be back on the pitch as an icon with some of my old teammates!” 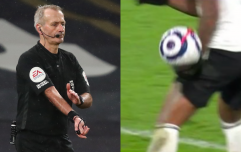 Accidental handball leading to a teammate scoring will no longer be an offence, IFAB announce

END_OF_DOCUMENT_TOKEN_TO_BE_REPLACED

FIFA 21 is the fastest selling sports video game of all time, selling 3.2 million copies so far, making £140 million in its first week since launching.

The game was first released on PS4 and Xbox One, but gamers who have since upgraded to the PS5 will get a free upgrade to the next gen console.

EA Sports have denied Beckham earns this much from his deal with the game, saying:

“We’ve seen the reports on the terms of our deal to bring David Beckham back into our EA SPORTS FIFA game. We don't disclose specific details, but we can be definitive that the figures being reported are being completely sensationalised and are in no way accurate.”

Watch our new show 'All To Play For', together with Coral, on YouTube, or download the podcast here.

"I was like, 'we're here now, let's just get it done'. If I'd been a bit more patient, it would have been better."@DarrenBent recalls joining Fulham on loan because he "couldn't be bothered" to travel across London to Crystal Palace

All To Play For w/ @Coral pic.twitter.com/bngKTqbNKV