After Daniel Cormier knocked out Stipe Miocic to become a double UFC champion, he called out Brock Lesnar. Conveniently, the former UFC heavyweight champion was in attendance. He entered the cage, shoved DC and engaged in a back-and-forth to cut a promo.

END_OF_DOCUMENT_TOKEN_TO_BE_REPLACED

The only problem is, Lesnar can't actually take a fight in the UFC right now due a USADA violation. He received a one-year suspension for testing positive for the banned substance clomiphene in multiple drug tests surrounding his return at UFC 200. He formally retired six months into the sentence. Per the UFC anti-doping policy, when a fighter under suspension retires, that suspension remains frozen until he or she re-enters the testing pool.

So, in order for Lesnar to take on Cormier for the belt, he would need to re-enter the USADA testing programme for a further six months.

This heavyweight title fight is going to be craaaazy! #UFC226 pic.twitter.com/zrYOwOhaCo

At the UFC 226 post-fight press conference, Dana White confirmed that the process of Lesnar re-entering the testing pool had already begun. By his estimations, Lesnar should be able to return to the Octagon in January 2019.

White's no dummy. He's well aware that Lesnar receiving an immediate title shot after the disaster that was UFC 200 won't sit well with a lot of folks. He rewrote history describing Lesnar's last UFC outing, perhaps in a bid to justify giving him another crack at the belt. Unlike White would have you believe, his win over Mark Hunt, a former kickboxing world champion as opposed to an MMA world champion, was actually overturned to a No Contest following his positive test results.

"Listen, people are going to criticise us no matter what we do. Brock came in, he popped for that thing, but he beat Mark Hunt, who was one of the top guys. He's a former world champion. It's a fight that people want to see. It's definitely a fight that Cormier wants. Cormier wants that fight. I can guarantee you if Stipe won, Stipe would have wanted that fight too."

Supposedly, Lesnar's attendance in the T-Mobile Arena only came together a few days before the event. White claims he only heard about his intentions to show up earlier in the week.

"Yeah, we're definitely going to make that fight. So, Lesnar hit me up a couple of days ago and says, 'Sorry I went dark on you, but I had some stuff I had to take care of. I'm going to come to the fight this weekend.' Ok, see you Saturday.'

"He came here tonight, he was all fired up, if you couldn't tell. Right when he got to my seat on the side, he was acting like a lunatic. He was fired up and excited for this fight. His gut told him Stipe, because he felt Cormier put too much weight on for this fight, he thought it was going to affect him. And... it didn’t.” 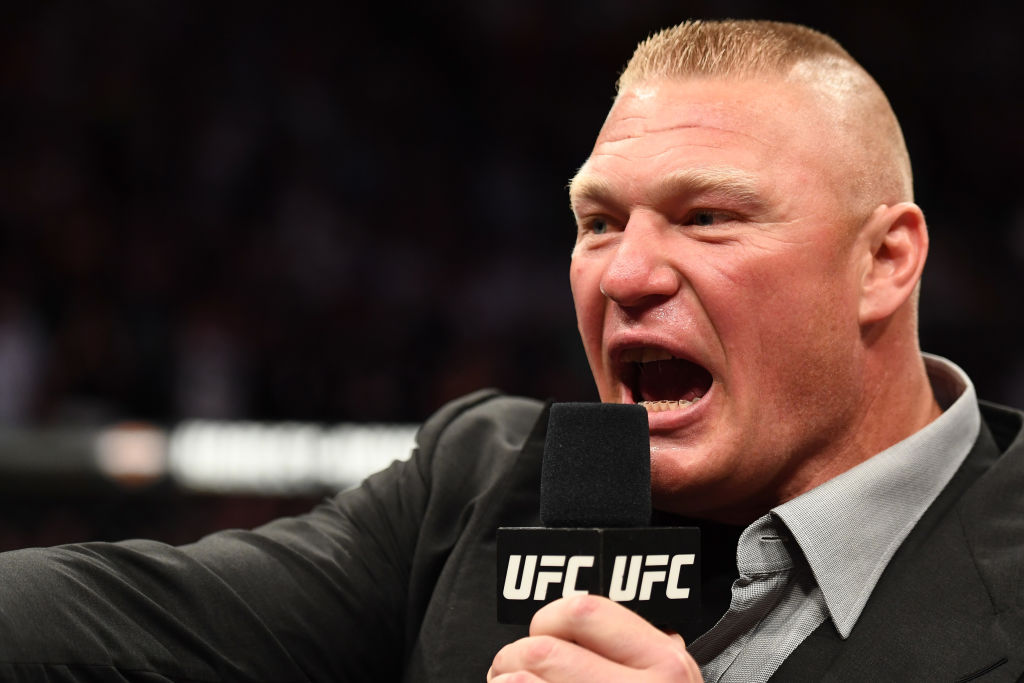 While the verbal exchange between Cormier and Lesnar appeared to be straight out of a WWE script, promotor White claims there's genuine beef between the two fighters. According to White, the moment when all hell broke loose inside the Octagon was real.

"I said, 'Calm down. Relax. Stop. We get it. There's going to be a fight. Calm down' They were both fighting. Did you see DC push me up against the cage? I'm too old for this shit. You can't be doing that to me. They were all fired up. Everybody in there was crazy. Then Cormier's little guy starts running over pushing Brock and I'm like, 'This is about to turn into a shitshow that the commission is not going to like.' So, I just tried to get everybody to chill out."

White added that Lesnar is 'free' to fight in the UFC despite being under contract with the WWE. He stated that Lesnar has a 'good relationship' with Vince McMahon, who he believes is 'in the loop' regarding Lesnar's plans.