Cyborg trying her hand at professional boxing is one of the few MMA-boxing crossovers people wouldn't complain about too much.

There's no denying that Cyborg, arguably the P4P greatest female fighter ever, is the champion of the UFC's weakest division.

END_OF_DOCUMENT_TOKEN_TO_BE_REPLACED

The very first title fight of 2017 was a 145 lb clash between Germaine de Randamie and Holly Holm. So it only seems fitting that the end of year closer is also for the featherweight strap as Cyborg defends against 'The Preacher's Daughter'.

However, it's clear that there just isn't enough talent at 145 lbs after its debut year in the big leagues. The fact that there aren't even rankings on the UFC's official website speaks volumes. 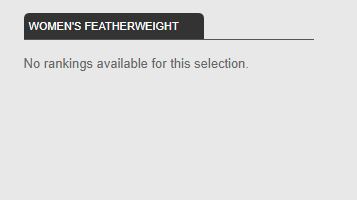 If Cyborg manages to beat Holm, her next move isn't clear. We've already seen how much the Brazilian has struggled to make 140 lbs, so moving down is never going to happen. She will likely wait for Invicta champion Megan Anderson to sort her visa issues out or get matched up against another natural bantamweight. That is unless the UFC brings in fresh talent which is admittedly hard to come by in the division.

However, as she explained during the recent UFC 219 conference call, she would be willing to seek a new challenge in professional pugilism, especially if Zuffa boxing gets set up in 2018.

"For me, it would be really nice to maybe finish my career with one boxing fight. Dana knows that. I told him if I had an opportunity like McGregor to do one boxing fight, yeah I would like to do that. I love my job, I love to fight and I love to compete."

"I don’t want to end my career and think about why I didn’t do it. I want to do it. I must train hard and do what I have in front of me when they have an opportunity for me."

Considering she has sparred with double Olympic gold medalist and undefeated professional champion Claressa Shields and women's boxing veteran Mia St. John, both of whom had nothing but positives to say about her, it may not be the worst idea.