Less than 24 hours on from winning Euro 2016 in Paris, Portugal were back on home soil.

Having touched down back in Lisbon, the team were whisked away from the city's airport and promptly began their open-top bus parade of the Portuguese capital.

'Welcome back to Lisbon Portugal'👏 👏 👏

As you might expect, Cristiano Ronaldo's dodgy knee didn't keep him from being a central figure in the celebrations - although he did manage to keep his top on.

The bus weaved its way through Lisbon's streets and Ronaldo shared his own footage of the Portuguese supporters' celebrations outside Belem Palace, first on his Instagram account... 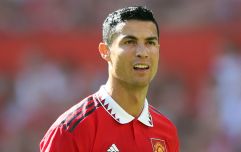 END_OF_DOCUMENT_TOKEN_TO_BE_REPLACED

Earlier in the day, they'd called in on the Portuguese president, Marcelo Rebelo de Sousa, who announced that he would be honouring the players' achievements in a special way.

“I have to praise everyone,” he explained to Portuguese broadcaster RTP. "I will commemorate them with the Order of Merit of Commanders - that is a decree that has never been given to the national team.”

Not bad going for a side that didn't win as many Euro 2016 games in normal time as Iceland. Not that anyone from Portugal minds too much.