Conor McGregor's next fight could smash each and every UFC record

This fight is not likely to happen until September at the earliest. Conor McGregor's UFC comeback was initially projected as August.

Georges St-Pierre is back and the fight possibilities seem endless.

END_OF_DOCUMENT_TOKEN_TO_BE_REPLACED

Anderson Silva, Johny Hendricks, Tyron Woodley, Michael Bisping, Nick Diaz and Conor McGregor have all been linked with a comeback fight for 'Rush'.

The former welterweight champion's coach, Firas Zahabi, has two "epic" fights in mind. One of them will surely excite fight fans the world over. 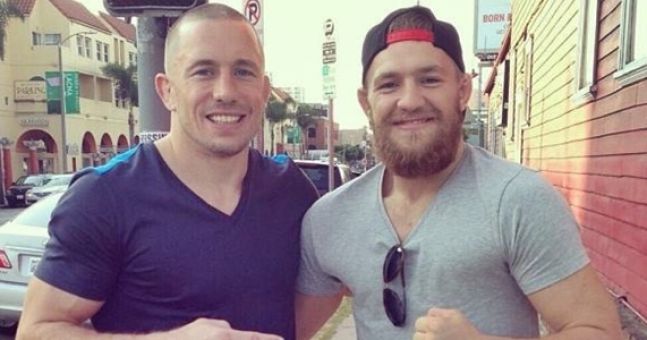 During a wide-ranging interview with Ariel Helwani on The MMA Hour, Zahabi said his 'ideal scenario' would be for St-Pierre to take on either UFC middleweight champion Michael Bisping or McGregor. It is likely that any fight against the Dubliner would be at a catchweight of either 160 or 165lbs.

St-Pierre vacated the welterweight title [now held by Woodley] in late 2013 but Zahabi is not certain if his fighter would be overly keen on chasing and defending titles again. He said:

"Of course, Tyron Woodley, he’s the champion and et cetera, but he has his fight with ‘Wonderboy’ [Stephen Thompson]. And if Wonderboy wins, then they’ll have a trilogy. And of course we don’t want to fight with Wonderboy as we go way back together."

Zahabi added: "Of course, McGregor is such a mega-star that if you put those two on a main event, I don’t think that anybody in the world wouldn’t watch that. I think that even non-MMA fans would watch that."

McGregor already boasts the UFC pay-per-view buy record of more than 1.6 million for his UFC 202 victory over Nate Diaz. Were he to take on St-Pierre, in the opinion of Joe Rogan and many others within the business, it would smash all previous records.

Speaking soon after UFC 202, last year, St-Pierre told The MMA Hour he would be interested in taking on 'The Notorious'. He declared:

"I think I can beat him. I can beat both of these guys [McGregor and Diaz] too. As a fighter, I'm confident of beating them because I think I am the best."

END_OF_DOCUMENT_TOKEN_TO_BE_REPLACED

Were such a fight to take place, there is also the added spice of McGregor's derisory comments about the Canadian at his recent 'An Experience With... ' event in Manchester. Asked about St-Pierre's role in setting up a new fighter's union, McGregor proclaimed:

"I’m like, what the fuck are you talking about? The only reason [St-Pierre is] standing in the middle of that union is because you couldn’t get the deal you want. You’re the fakest of everyone up there."

This story is practically writing itself.

A mighty option, were any Floyd Mayweather Jr. boxing bout to indefinitely stall.