Much has been made about Conor McGregor's fitness in the run-up to UFC 205.

"Conor’s foot is hurt, but he thinks he can fight. I want him to fight Aldo," UFC president Dana White revealed just days before the announcement came that 'The Notorious' would be facing Eddie Alvarez and not Jose Aldo in his next outing.

END_OF_DOCUMENT_TOKEN_TO_BE_REPLACED

Conflicting reports of an injury to McGregor's foot had been circulating for some time, with the medical suspensions from UFC 202 released at precisely the same time as the Irishman's head coach John Kavanagh offered a positive update on his star pupil's health.

A scan revealed a pre-existing fracture to McGregor's ankle but, apparently, there was no lasting damage sustained in his August rematch with Nate Diaz.

McGregor's coach Owen Roddy recently poured water on the suggestions that the SBG stand-out is struggling with an injury as he prepares to fight Eddie Alvarez for the UFC lightweight title next month.

"He was back in the gym moving about two days afterwards in Las Vegas," Roddy revealed in an interview on Submission Radio.

"You saw the amount of kicks he threw in the Diaz fight and he obviously had caught a few of them on the knee and he just really badly bruised his shin. 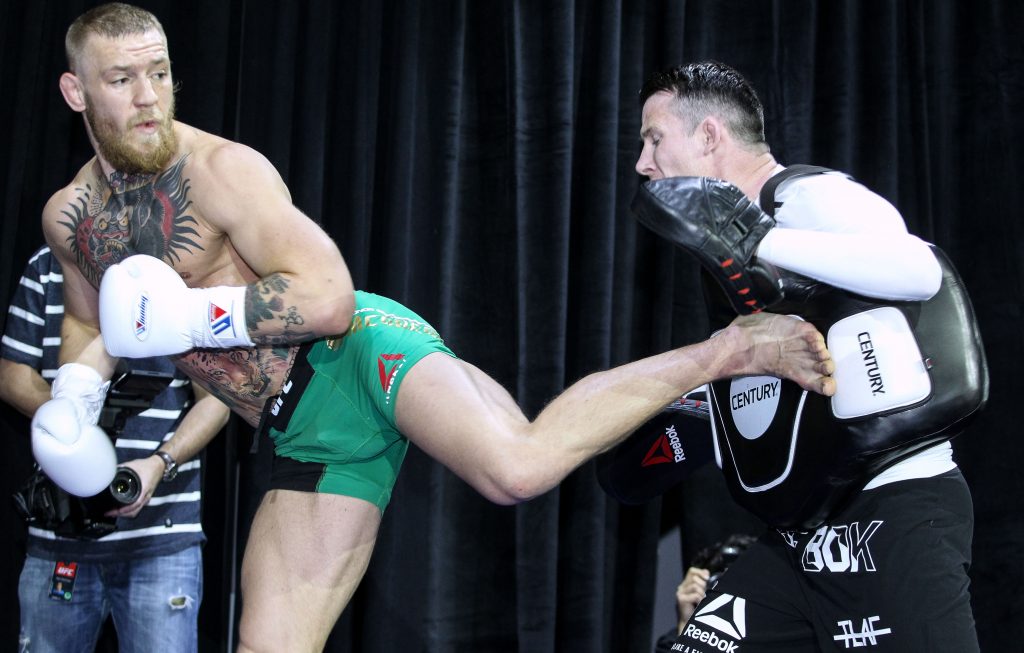 "There was no serious issue with the foot. I think they found a small fracture from a while back but it was nothing.

"The shin itself was just really bashed up after the fight but within a couple of days he was back training and moving around in the gym in Vegas. There's no issues there and he's 100% and he was a couple of days after."

It seems odd that Dana White would explicitly claim that his organisation's biggest draw was injured only to sign him to a fight mere days later, but Roddy wholly rejects the rumours.

"No, no, nothing really. Conor's leg is perfectly fine," Roddy insisted.

"As I said, after the Diaz fight he was back moving around within days. He's good to go. We have six weeks now so he will be firing on all cylinders from now until the fight."

Despite winning by majority decision, Conor McGregor left the ring in crutches pic.twitter.com/0V0z5dkQYo

Roddy plays a crucial role in all of McGregor's fight camps and he revealed that the team would remain faithful to the new approach they adopted ahead of UFC 202, whereby 'The Notorious' availed of a much more structured training regimen.

"It will be similar to the Diaz (camp) where everything will be a lot more structured," Roddy continued.

"The type of cardio he'll be doing with like three or four days on, whatever cycle we decide to do. Everything will be structured to a tee though and he'll have to stick to it.

"Seeing what he did in the last fight with Diaz, being able to go up in weight and go five rounds with a guy that is a lot heavier - that proved it worked and it doesn't need to be changed. Everything worked the last time around and it will work again this time."

McGregor remains a favourite according to the bookmakers for his November 12 match-up with Alvarez, when he will attempt to become the first fighter in UFC history to hold a belt in two different weight classes simultaneously.

And Roddy is predicting a knockout for his fighter, something that only one man has been able to do to Alvarez in his entire career.

"No disrespect to Alvarez, he's a great fighter, but he moves very similar to a lot of the people that Conor has fought," Roddy said.

"Even when Conor has fought strikers they all become that type of fighter. When Conor lands they become a panicked wrestler. That's what's going to happen.

"Conor's very clean and when it comes to a couple of exchanges, Alvarez is going to feel the difference in accuracy and power and he will start to wrestle.

"That's what they all do. Conor has fought that type of person all his career. Alvarez is a great wrestler so there will be things we will be working on with Conor to make sure that Alvarez can't keep a hold of him and can't keep him against the fence. Conor is going to land and it's going to be a matter of time before Alvarez goes to sleep to be totally honest."