Dana White has the look of a man who is tired of chasing his tail.

The UFC president could easily have expected to walk away from the fight game when the promotion was sold to WME-IMG for $4.2bn, last year. Instead, he has stuck around and helped with a tumultuous transition.

END_OF_DOCUMENT_TOKEN_TO_BE_REPLACED

The promotion is struggling to match its bumper 2016, which had five pay-per-views of over one million [three featuring Conor McGregor, Ronda Rousey's comeback and UFC 200]. Ahead of UFC 211, this weekend, White was on SportsCenter to hype the event up.

However, he found himself talking about two fights that may never happen. Tired of waiting on Georges St-Pierre, White declared that UFC middleweight champion Michael Bisping will now take on Yoel Romero.

He also commented on the much hyped crossover boxing fight between two-weight UFC champion McGregor and undefeated boxing world champion Floyd Mayweather Jr. September 16 [this year] was the date he was 'shooting for' but that has now been taken up by Canelo Alvarez' bout with Gennady Golovkin.

"We're not even that far along in the [McGregor-Mayweather] process," White admitted, "so I guess I don't have to worry about the date any more."

White did have good news for McGregor fans, though. He has been in contact with 'The Notorious' and has found a man willing and eager to throw down. White said:

END_OF_DOCUMENT_TOKEN_TO_BE_REPLACED

Were the Mayweather fight to go ahead in the autumn, there would be scope for an end-of-year return to the UFC.

TheMacLife, the website McGregor has a stake in, tweeted out their story of White's comments and, early this morning, McGregor retweeted it. 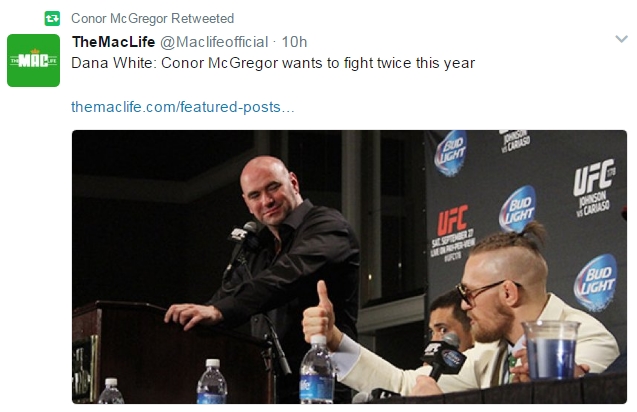 It has been seven months since McGregor last fought - at UFC 205 - and the world is eager to hear of a return date being set.