"The European Super League is nowhere near as big as racism"

Former professional football player Clinton Morrison has called for the "same energy" used to tackle the issues raised by the Super League to be brought to the fight against the bigger issue of racism. 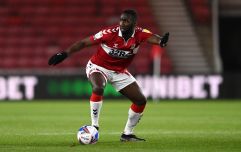 END_OF_DOCUMENT_TOKEN_TO_BE_REPLACED

The 41-year-old former forward said that this is something he is "passionate" about and will keep on speaking about the issue.

Speaking on Sky News, Morrison said: "You see all the energy that I've seen from the people at UEFA and FIFA tackling this European Super League and everyone else talking about it. People from government getting involved. Get involved in this to tackle racism and online abuse, because you show all this energy when it comes to money and stuff like that."

He continued: "The European Super League is nowhere near as big as racism."

"So show that energy which everyone did in stopping that, to stop racism.

"Everyone will be a lot happier because that is one thing that burns me massively."

Morrison said that so many people have energy for the Super League, which saw football fans from across the continent come together, but he pleaded: "show that [energy] for racism and online abuse, please."

He added that "everyone will be a lot happier and it can be done."

Clinton Morrison passionately calls for the energy shown against the European Super League to also be used to stamp out racism. pic.twitter.com/Tof63IItpC

This comes after several football governing bodies announced a social media boycott, which will take place next weekend from Friday 30 April at 3pm until midday on 3 May.

In response to the sustained discriminatory abuse received online by players and others connected to the game, English football will unite for a social media boycott from 15:00 BST on Fri 30 April to 23:59 BST on Mon 3 May END_OF_DOCUMENT_TOKEN_TO_BE_REPLACED

The boycott will include Premier League, Women's Super League and English Football League clubs, as well as the FA and other governing bodies.

Edleen John, The FA’s Director of International Relations, Corporate Affairs, said: "It’s simply unacceptable that people across English football and society more broadly continue to be subjected to discriminatory abuse online on a daily basis, with no real-world consequences for perpetrators.

"This needs to change quickly, and we continue to urge social media companies to act now to address this. We will not stop talking about this issue and will continue to work with government in ensuring that the Online Safety Bill gives sufficient regulatory and supervisory powers to Ofcom.

"Social media companies need to be held accountable if they continue to fall short of their moral and social responsibilities to address this endemic problem."