"For coaches there are no equal opportunities."

Clarence Seedorf has condemned a lack of "equal opportunities" given to black coaches in football.

The former AC Milan stalwart is the only player in history to win the UEFA Champions League with three different clubs.

In addition to his 2003 and 2007 triumphs with the Rossoneri, the Dutchman has also lifted the biggest prize in club football with Ajax and Real Madrid.

Seedorf took over as AC Milan manager in January 2014, but did not last long in the job. He was sacked four months later, being replaced by former teammate Filippo Inzaghi.

Since leaving Milan, Seedorf has had spells in charge of Chinese side Shenzhen, Deportivo La Coruña and the Cameroon national team, but he has not been offered a single role for nigh on two years.

Clarence Seedorf remains the only player to have won the Champions League with three different teams. (Photo: Getty)
Advertisement

Speaking to Italian newspaper Gazzetta dello Sport, the 44-year-old criticised what he sees as a lack of opportunities given to black managers and coaches. 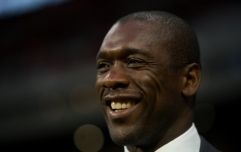 END_OF_DOCUMENT_TOKEN_TO_BE_REPLACED

He said: "I played 12 years in Italy. After Milan, despite having done a great job, I received no calls.

"Holland is my country, yet again, zero calls."

Seedorf questioned why budding black managers, many of whom with illustrious playing careers, had not been given coaching opportunities in Europe.

"What are the selection criteria? Why do great champions have no chance in Europe where they wrote pages of football history? Why does Vieira have to go to New York and Henry to Canada?"

He then directly condemned the lack of opportunities for black coaches in the game.

"For coaches there are no equal opportunities: if we look at the figures, there are no Black people in the positions of greatest power in football.

"It's something that concerns the whole of society. Everyone, especially those who can change things, must feel the responsibility to create a meritocratic world and keep all the doors open if they aspire to excellence.

"The best results can come from diversity."

popular
The JOE Friday Pub Quiz: Week 232
Aldi announce new packaging ban to come into action across supermarkets nationwide
Scarlett Moffatt Discovers ‘30% Rain’ On Weather App Doesn’t Mean Chance of Rain
WATCH: The trailer for The Handmaid's Tale season four is finally here
Prince Harry praises Netflix's The Crown, says it's "loosely based on truth"
Slowthai agrees to stop spitting in fans' mouths at gigs due to Covid-19
Making your bed is actually bad for you, doctor claims
You may also like
Sport
Clarence Seedorf shows he's still got it with classy touch on sideline
Sport
Robert Pirès and Clarence Seedorf confirmed for Soccer Aid's World XI
Sport
Dutch legend Seedorf keen on a Premier League job
Sport
Clarence Seedorf could be on his way to the Premier League
Sport
Heather Knight: From semi-professional to World Cup winners in three years
Next Page