Christian Eriksen gives update on condition and thanks fans for support

Eriksen looks to be in good spirits and though he can't play the rest of the tournament, he'll be cheering on his teammates all the way home

Football breathed a collective sigh of relief once we saw the first images of Christian Eriksen sitting upright and even more so after he put out an initial message to confirm that he was ok following his sudden collapse during the game against Finland.

Now though, he has given a further update on his condition as well, in which he thanks the fans for all of their "sweet and amazing [...] messages", stating how much it means to him and his family.

As you can see, he wants to reiterate: "I'm fine - under the circumstances", at least. Though it has been confirmed he suffered a cardiac arrest on the pitch, it still remains how the failure came about whether a larger issue needs to be determined. 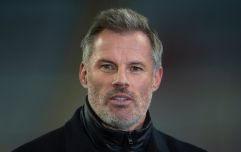 Jamie Carragher praises Richarlison for calling him out on Twitter

END_OF_DOCUMENT_TOKEN_TO_BE_REPLACED

He goes on to insist that despite having to say in hospital for "some examinations", he will continue to "cheer on the boys on the Denmark team in the next matches", before issuing a rallying cry to their supporters and football fans to "Play for all of Denmark".

Once again, we're just glad he's ok and it's truly touching and powerful to come out to back his teammates when there are much bigger things going on right now.

All the best, Christian.

popular
Tourist dies after losing arm and leg in shark attack at popular resort
Jordan Peterson suspended from Twitter over Elliot Page comment - says he won't apologise
Adele fans have 'mad respect' for her after she stopped her Hyde Park gig to help someone in distress
Woman sells pics of her thumbs on OnlyFans for £4,000
The JOE Friday Pub Quiz: Week 301
Tottenham fans will love Richarlison's Arsenal Instagram message after transfer
Threesome sees 60-person brawl break out on cruise ship, says passenger
You may also like
Entertainment
Travis Barker rushed to hospital after tweeting 'God save me'
Life
TikTok star's son shot dead day before 19th birthday as she pleads with followers to find killer
Life
You can get paid £20k to 'work' IN a video game
Life
Groom shoots friend dead by mistake after firing shot in celebration at his wedding
Life
Model and social media star Niece Waidhofer dead by suicide at 31
Next Page