The Team Sky rider crossed the finish line in Paris on Sunday, also becoming the first man to defend his title in twenty years. 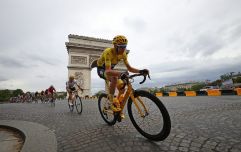 END_OF_DOCUMENT_TOKEN_TO_BE_REPLACED

In an emotional victory speech, Froome paid tribute to those that were killed in the recent terror attacks in Nice.

84 people were killed in the city during Bastille Day celebrations when a lorry was driven through crowds by Mohamed Lahouaiej Bouhlel before he was shot dead by police.

That same day, stage 12 of the Tour had seen is pass from Montpellier to Mont Ventoux. The following day, it was decided that the time trial between Bourg-Saint-Andéol and La Caverne du Pont-d'Arc would go ahead, despite the terrible scenes witnessed in Nice.

"This Tour has obviously taken place against the backdrop of terrible events in Nice and we pay our respects once again to those that lost their lives in this terrible event.

Of course these events put sport into perspective, but they also show why the values of sport are so important to free society.

We all love the tour because it's unpredictable, but we love it more because of what stays the same: the passion of the fans from every nation along the roadside, the beauty of the French countryside and bonds of friendship created through sport. These things will never change."

Triple Tour champion Chris Froome's speech from atop the podium in Paris after winning the #TDF2016 https://t.co/rMj4cmORYP

popular
North Korea is running out of food as a bunch of bananas 'now costs $45'
A definitive ranking of every swear word from worst to best
Paul Gascoigne reckons he was a better player than Foden even when he was drunk
Russian manager goes against Ronaldo and drinks bottle of Coke at press conference
GB News fans cancel Specsavers because they hate cancel culture
Here's how to see who's been taking screenshots of your Instagram Stories
'I made Tommy Robinson go viral, will you forgive me?'
You may also like
Fitness & Health
Free bikes to be given out by the NHS to combat obesity
Sport
Geraint Thomas in tears as he is set to become Tour de France champion
Sport
Chris Froome tells French policeman to 'f*ck off' after being pulled off his bike
Sport
Phillipe Gilbert shares image showing extent of his Tour de France crash injury
Fitness & Health
What it takes to compete in the Tour De France
Next Page