England got their 2018 World Cup campaign off to a winning start on Monday night, beating Tunisia 2-1, thanks to two Harry Kane goals.

Things didn’t run all that smoothly though. Kane put England ahead in the first half, and they looked reasonably comfortable. Until that was until Fakhreddine Ben Youssef went down in the box, after being caught in the face by an elbow from Kyle Walker.

We say “caught”, what we really mean is lightly brush. It was more like the light caress that you might pat a dog on the head with, or a small child.

Anyway, Ben Youssef went down holding his face, and Ferjani Sassi equalised from the spot to make it 1-1.


England fans in Russia and back home were pretty fuming. There were a lot of angry responses on social media, but the best possibly came from Southampton striker Charlie Austin. 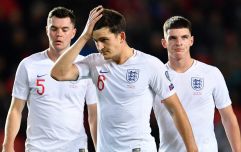 END_OF_DOCUMENT_TOKEN_TO_BE_REPLACED

It was a sly, knowing tweet from Austin. Prior to moving to St Mary’s, his goal scoring record was incredible (45 goals in 82 games for QPR, for example). But his Southampton career has been stifled by injuries, keeping him out of the first time and limiting his chances.

Injuries have also hampered his potential international career. There’s been points when he’s been fit where he was considered an outside shout to have gone to Euro 2016, or to Russia. In May 2015, while still at QPR, he was called up to the England side for a friendly against Republic of Ireland and a qualifier against Slovenia, but he didn’t feature in either game.

You may also like
Entertainment
The Great Debate: Where is the fabled northern line?
Food
Would you taste a Wigan Kebab?
Sport
Mark Noble will never die
Sport
How I learned to love the cricket, thanks to Ben Stokes
Sport
England fans on the impact of the Women's World Cup and the future of the game
Next Page