A late goal from forward Odsonne Edouard earned Celtic a dramatic 1-0 win away from home as the club moves 10 points clear at the top of the Scottish Premiership. 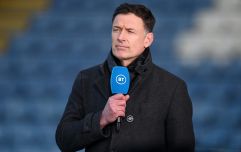 END_OF_DOCUMENT_TOKEN_TO_BE_REPLACED

The win gives Celtic a massive boost in their bid for an eighth consecutive title but the game was somewhat soured by the removal of the tri-colour with Scottish football dogged by a string of recent incidents concerning sectarianism.

In the footage below, widely shared on Twitter in the time since it was posted, shows the Celtic supporter jumping over a wall to chase after the stewards who had removed the flag.

Anyone notice the steward take down the tri-colour and the boy jump straight down after it 😂😂😂🇮🇪 pic.twitter.com/IhQPQQAtVW

Kilmarnock manager Steve Clark and striker Kris Boyd have both spoke about sectarian issues in recent weeks and Deputy Chief Constable Will Kerr said that he was surprised by how normailsed sectarianism was in Scotland.

"What I have been surprised at over the last six months, particularly when it comes to behaviour at football matches is two things," Kerr said at a Scottish Police Authority board meeting.

"One has been that level of sectarianism on display, and I say that having policed in Northern Ireland for nearly 30 years, and I have been surprised at how much it is seen as normal.

"All the symptoms and how it manifests itself at football is seen as normal in Scotland and that has surprised me.

"At times it feels almost visceral, in a way that I have not experienced in quite a while, and I say that with some surprise."