Carlos Tevez, the world's highest-paid footballer, will miss out on Asia's premier club competition after his new club Shanghai Shenhua suffered a shock defeat in qualifying for the AFC Champions League.

The Argentine, who is earning a reported £614,000 with the Chinese Super League outfit, played 90 minutes for Gus Poyet's team as they slipped to a 2-0 defeat at home to Brisbane Roar.

Brandon Borrello and Tommy Oar struck in the first half for the Australian side, with neither Tevez nor strike partner Obafemi Martins able to give Shenhua a route back into the game.

Brisbane Roar earned themselves a place in the group stages with the victory, where they will face teams from Japan, Thailand and South Korea. 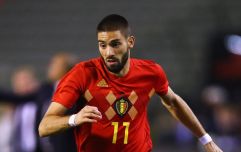 END_OF_DOCUMENT_TOKEN_TO_BE_REPLACED

The other Chinese club in the play-off round, Shanghai SIPG, made it through to the groups with a 3-0 win over Thailand's Sukhothai on Tuesday, with former Chelsea man Oscar opening the scoring. Guangzhou Evergrande and Jiangsu Suning are also in the group stages after finishing in the top two last season.

It was the worst possible start for Tevez, and for former Sunderland manager Poyet, who only took over in November.