You can't move for team announcements these days.

An hour before kickoff the flurry of identical tweets and Facebook posts bombard our timelines. It's to be expected really - everyone's eager to share who's in and who's out of the starting XIs, and it all results in a tsunami of lineups. 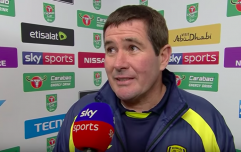 END_OF_DOCUMENT_TOKEN_TO_BE_REPLACED

The official club accounts are hardly oblivious to the excitement around match day selections and don't waste a second in getting the information out there into the ether.

To add value to their output, they invariably use fancy graphics and eye-catching designs. The days of simply sharing a snap of an A4 piece of paper are well and truly over.

Perhaps with that in mind, Burton Albion decided to share the substitutes for their game against Wigan Athletic using an extremely bright yellow we'll call 'radioactive custard'.

If this wasn't bad enough, the decided to use a very thin-lined font in plain white - meaning that making out the benched players was not only nigh-impossible but retina melting.

As you can imagine, those who weren't fully blinded by the tweet were less than impressed...

In case you're interested, the subs were: Mousinho, Bywater, Beavon, Ward, Choudhury, Williamson and Flanagan. The game ended 0-0.