When you announce yourself on the Premier League stage, all eyes will be on you - and in 2016 that means people will go back through your old tweets.

The Burnley striker scored his first Premier League goal in the victory over Liverpool, continuing a great scoring streak after finding the net 23 times in the Championship last season. 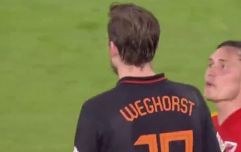 END_OF_DOCUMENT_TOKEN_TO_BE_REPLACED

He was praised earlier this summer for speaking out about racism among his own club's fans, something which was followed by a life ban for one Clarets supporter.

But the goal against Liverpool encouraged some people to dig back further to when the 25-year-old was coming up through non-league football with Hinckley United and Luton Town.

A warning that the tweets screenshotted below (which have since been deleted) contain homophobic and offensive language.

The response to Gray's tweets has been broadly condemnatory - just because they're four years old, back when he was in his early twenties, doesn't mean people are condoning what the striker said.

Footballers playing in England have been suspended for offensive tweets in the past, so a ban for Gray would not be out of the question.

Robert Huth missed two games in the 2014/15 season for transphobic tweets, while a homophobic remark from Coventry defender Chris Stokes saw him banned and fined by the football association.

popular
R Kelly will probably die behind bars after being handed 30 year prison sentence
Bette Midler wants the US to ban Viagra because it’s ‘God’s will’ to have a ‘limp d**k’
Travis Barker’s daughter shares picture of Blink-182 star in hospital bed - tells fans to ‘send your prayers’
Fans shocked after Machine Gun Kelly smashes glass on his face during performance
British teen says she was raped in Majorca hotel by 'famous actor and musician'
Police hunt for two 'laughing' men who kissed three-year-old girl in front of distressed mum
July heatwave: When to expect hot weather and how long it will last
You may also like
Sport
Leeds and Burnley demand Everton keep all documents in finances row
Sport
Ashley Barnes claims referees want Burnley to get relegated for 'ugly style'
Sport
Burnley and Leeds write to Premier League over concerns about Everton breaching financial rules
Sport
Burnley fan appears to perform Nazi salute towards Tottenham fans
Sport
Burnley's Phil Bardsley in heated tunnel exchange after controversial Spurs penalty
Next Page