The England international kept out Manchester United time and time again as Burnley held out for a goalless draw at Old Trafford - their first point at the ground in more than 40 years. 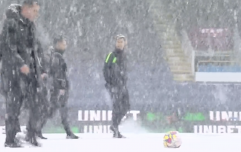 Burnley vs Tottenham Hotspur game postponed due to snow

END_OF_DOCUMENT_TOKEN_TO_BE_REPLACED

Heaton actually began his career at Manchester United, though he was unable to break into the first team and left in 2010 without playing a competitive game.

He put in the hours in the Championship before landing at Turf Moor, and it was during that period - specifically during his solitary season with Bristol City - where the Chester-born keeper enjoyed the highlight of his career.

We're not talking about anything that happened on the pitch, as City slipped out of the second tier with Heaton in goal after conceding 84 goals in a dismal season.

That 24th-place finish could have been reason for fans to lose hope, were it not for one of the best ever club-produced videos to ever grace the internet.

Heaton's delivery of his opening line would make Daniel Day-Lewis proud, but he's not the only member of that Bristol City squad who showed an acting career awaits once they hang up their boots.

Strike duo Sam Baldock and Ryan Taylor were more convincing as supermarket workers than they were as Championship strikers that season, while no City production would be complete without Louis Carey's glorious Westcountry accent.

Premier League clubs take note: that's how to put an advert together.