Dublin-based Bohemians FC, however, have done exactly that for the 2019 SSE Airtricity Premier Division season. 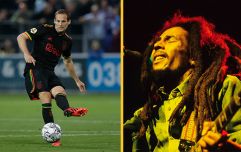 END_OF_DOCUMENT_TOKEN_TO_BE_REPLACED

Though the reason behind the unique design might not be immediately obvious, a tweet from the club has made clear the shirt is a nod to the time Marley performed at the club's home stadium, Dalymount Park, in 1980.

The shirt has since made headlines across the world, the club selling out its preorders and working to get another batch ready in time for next month.

The jersey, which is made by O'Neills, has now been given the seal of approval by the musical icon's son.

Ky-Mani Marley, who recently led Ajax fans in a prematch rendition of his father's song Three Little Birds, has made it known he is a fan. 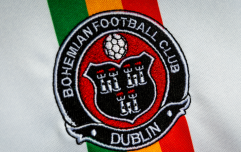 END_OF_DOCUMENT_TOKEN_TO_BE_REPLACED

"This is the dopest shirt I've ever seen," he told BBC News Northern Ireland. "I love it."

Coming from the great man's son, this is clearly high praise indeed.

Bob Marley and the Wailers' concert at Dalymount Park in July 1980 attracted thousands of fans. Marley died in May 1981, his show in Dublin proving to be his final outdoor performance.

popular
East London nightclub deaths: At least 22 people found dead in South African 'tavern'
Glastonbury: Watch the incredible moment Olivia Rodrigo and Lily Allen dedicate 'F*** You' to US Supreme Court
'Dinosaur lady' wins internet with baffling Question Time remark on rail strikes
Roy Keane booed as he appears on big screen in front of 50,000 fans
The JOE Friday Pub Quiz: Week 300 - the Triple Century
Derby County to exit administration after bid for club is accepted
Thibaut Courtois gets 'brick wall' tattoo to celebrate Champions League Final heroics
You may also like
Music
Reggae music to be protected by the United Nations
Music
Exclusive: Sting & Shaggy list their favourite reggae albums for us | #NAD
Music
From Lauryn Hill to The Beatles, which album changed your life? | #NAD
Music
Maverick Sabre: "Klashnekoff's The Sagas of... made me want to write" | #NAD
Music
You Should Know... Banx & Ranx
Next Page