'Big' John McCarthy has set the record straight regarding the origin of the dreaded 12-6 elbow rule in MMA.

Famed MMA referee 'Big' John McCarthy was in the room when the unified rules of mixed martial arts were being drawn up. So you'd be hard-pressed to find a better man to ask about the 12-6 elbow rule.

END_OF_DOCUMENT_TOKEN_TO_BE_REPLACED

The numbers refer to the face of a clock. According to the rule, it is illegal to strike with an elbow straight down on your opponent from 12 o'clock to six o'clock.

It is because of this antiquated restriction that Jon Jones has a loss on his record. Arguably the greatest fighter to ever grace an Octagon was disqualified from his bout with Matt Hamill for using the strike. Despite the fact that Hamill was so badly beaten up he had to be carried out of the Octagon, that bout went into his win column.

Any fans of Joe Rogan's podcasts will be well aware of the rule. So when McCarthy appeared on the Joe Rogan Experience, the host couldn't help but ask for his version of events.

"This is what I've always said, and I believe you're the one who told me this, that when the commissions were talking about techniques, they had seen those karate guys on ESPN at 1 am breaking bricks with their elbows and they're like, 'There's no way you could allow that strike because that strike would be too deadly.' Was that what happened?"

McCarthy's response of, "close," indicated that a great story was about to be told. Sure enough, this is exactly what happened. 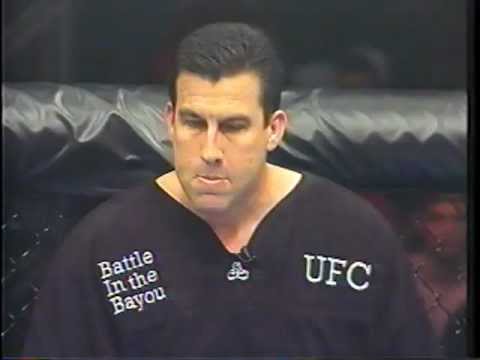 END_OF_DOCUMENT_TOKEN_TO_BE_REPLACED

When the unified rules of MMA were being drawn up, there was a relatively small group present. McCarthy explained that he was in that room with representatives from the Mohegan Sun Tribe, the New Jersey Commission while Marc Ratner, who was the Executive Director of the Nevada Commission at the time, was on a conference call. Dana White, Lorenzo Fertitta, Joe Silva,  Jeff Blatnick, King of the Cage promoter Terry Trebilcock, Yukino Kanda and Hideki Yamamoto of Pride were also there. As was a doctor named Dom Coletta, who was brought in as the medical advisor for the state of New Jersey.

While everyone complains about the 12-6 elbow rule, the original plan was much worse. Had it not been for McCarthy's intervention, there may not have been any elbows allowed in MMA.

"What they were trying to do was take away all elbows. And I go, 'Look it, you have elbows in Muay Thai. Every time you take something away, you are changing the sport and making it to where it's harder to actually have action because if you take away elbows, I grab wrist. If I'm good at grabbing wrist, I can hold wrist for a while. I can't do anything, I've got to pull my hand out. Whereas, if you grab my wrist and I Jon Jones and roll my elbow over and boom! bring it down, you let go of my wrist because you're being attacked.'"

McCarthy's argument almost worked, but the doctor in the house had an issue. A recent fight featured some elbows that didn't sit well with him.

"Brad Gabriel's trying to get a hold of Gan just to survive and Gan is taking his arm and he's boom! boom! boom! and he's bringing it straight down on top of Gabriel's head. Then he takes his back and he does the same thing like the old Brazilian style shots to the back of the head. He (Coletta) said, 'I can't have that. I've seen them break big blocks of ice like that. That's a dangerous elbow. We can't have that."

When McCarthy tried to argue the case for 12-6 elbows being allowed, Lorenzo Fertitta stepped in.

"And I started to combat it and Lorenzo Fertitta looks at me and goes, 'John, let it go. It's stupid.' And I go, 'Yes sir, boss,' and I backed away from it."

As a consolation, McCarthy confirmed with them that it was only the 12-6 elbow that they had a problem with. All other elbows were legal. And it's been that way since the sport started being a sport.