Never working with animals or young children is the number one rule of television broadcasting and always has been. It never ends well for anyone foolish enough to try. Sadly for BBC Sport's Dan Walker, he was given a stark reminder whilst presenting live to the nation on Saturday's Football Focus. 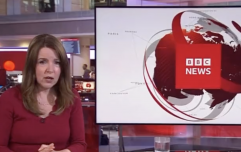 END_OF_DOCUMENT_TOKEN_TO_BE_REPLACED

The 39-year-old was at Allpay Park in Hereford ahead of home side Westfields FC's FA Cup first round tie with Curzon Ashton. The local fans certainly got into the spirit of things, with one junior supporter called Jacob even creating his own replica of the famous trophy out of tinfoil and cardboard.

After having made a gentle joke about the homemade effort earlier in the show, Walker kindly asked Jacob to join himself and colleagues Trevor Sinclair and Dean Saunders as part of the remaining broadcast. Everything was going smoothly until the host asked his new friend to rate Trev and Deano.

"Jacob, before we let you go, just give these two a mark out of ten for their punditry..." asked Walker cheekily. The youngster was very polite in affording them a generous 9 out of 10. Saunders then asked him to rate the presenter, or 'Nasty Dan'. A measly 5 out of 10 was the immediate response.

Sinclair and Saunders absolutely loved the youngster's candour. As for Walker? He put on as brave a face as he could in the circumstances...