He was getting into the skiing a bit too much. 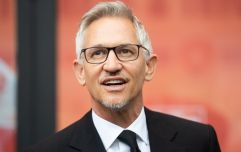 END_OF_DOCUMENT_TOKEN_TO_BE_REPLACED

It appears the commentator was completely enamoured by Oleksandr Abramenko's eyes, which he brought up repeatedly during the broadcast in increasingly exaggerated terms.

In the first instance, the commentator described Abramenko's "steel blue eyes that could cut through Fort Knox's deepest safe" as though the skier was some kind of Marvel super villain.

A few moments later the co-commentator appeared to fall under his hypnotic spell, too, like he was looking into the eyes of Medusa and not a fairly normal looking Ukrainian man, simply uttering "proper blue steel" before falling completely silent.

Not to be outdone, and desperately trying to think of words other than blue, or steel, the original pundit released all his hopes, dreams and fears with the following simile:

"The man... whose face... has those piercing blue eyes. It's like looking into a hurricane... with two eyes."

The beauty of this moment, other than it being complete, rambling, stream-of-consciousness nonsense about a hurricane with eyes, is the gigantic yellow goggles.

The gigantic yellow goggles that meant absolutely nobody could make out if he had nice eyes or not.

It was poetry, it really was.