They're breaking the bank for the World Cup winner

The Bundesliga champions will pay a club record fee, reported to be £68m, in the summer for the defender.

Hernandez will join up with Bayern in the summer on a five year deal, starting on July 1 2019.

The 23-year-old has risen to stardom over the past couple of seasons, displacing Filipe Luis from the Atlético Madrid starting XI and taking Benjamin Mendy's place in the France team that won the World Cup last summer. 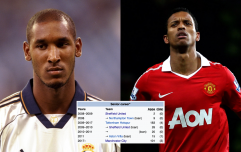 END_OF_DOCUMENT_TOKEN_TO_BE_REPLACED

Despite playing mostly at left-back thus far in his career, it's likely that Bayern will use him in central defence, where he's equally adept at playing.

David Alaba remains one of the best left-backs in world football, while Bayern's centre-back options lack the dynamism needed to excel at the very top of modern football. Jerome Boateng is likely on his way out of the Allianz this summer, making way for Hernandez to step in alongside Niklas Süle or Mats Hummels.

For Atlético Madrid, this news comes as a blow, and could signal a mass exodus this summer. Star player Antoine Griezmann is reported to be reconsidering his future at the club and Hernandez's departure could have a domino effect on other players in thw squad.

Diego Simeone will be hoping that's not the case, but given the money the club will recoup, it should't be too hard to find replacements, as he has repeatedly done over the years.


popular
QUIZ: Can you identify these cities highlighted on a map?
A definitive ranking of every swear word from worst to best
Jurgen Klopp argues with BT Sport interviewer over kick off times
The JOE Friday Pub Quiz: Week 219
Donald Trump paid $3 million for recount that uncovered more Biden votes
QUIZ: How well can you remember the movie Elf?
VAR would have disallowed Maradona's solo goal vs England, BT Pundits say