You might remember an Olympic coach, Dean Boxall, hitting the headlines after his exaggerated reaction to Ariarne Titmus claiming gold for Australia in the final of the women’s 400m freestyle. Well, now, he's back with a vengeance, and he simply cannot contain his joy!

END_OF_DOCUMENT_TOKEN_TO_BE_REPLACED

Ariarne Titmus beat US swimmer Katie Ledecky - the American's first individual loss at an Olympics. As it became clear that Titmus had won, Dean Boxall literally jumped for joy, ripped off his mask, and did what could only be described as an elaborate squat while holding onto the railing.

"I need to apologise, actually, because I tore my mask off and it ripped. I just lost it in the moment," Boxall said after his incredible display of excitement.

"It just came out," he said. "It built up in the trials, it was coming through and then when I saw the race unfolding I couldn't keep it in

"I think I went outside of my body."

But now, Boxall is at it again.

Ariarne Titmus' coach Dean Boxall has been at it again! 😂🕺#bbcolympics #tokyo2020 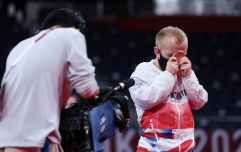 END_OF_DOCUMENT_TOKEN_TO_BE_REPLACED

As it becomes official that Titmus has once again won, Boxall once more throws himself around in furious happiness. You really can't help but smile, and his enormous reaction is both surprising and infectious.

However, his champion swimmer Ariarne Titmus was not surprised by his reaction, saying: "That's just the way Dean is. He's very passionate about what he does and he becomes quite animated.

"He puts 100% into being a swimming coach and he's sacrificed a lot of his family life with his kids and his wife for his job."

But Titmus isn't the only one to celebrate her coaches reaction, as social media is also dubbing him an Olympic icon.

"DEAN YOU WEAR YOUR HEART ON YOUR SLEEVE WHAT A PASSIONATE COACH WITH OUT COACHES LIKE YOU WE WOULDN'T HAVE CHAMPIONS LIKE WE HAVE," writes one user that either forgot caps was on or is just really excited.