Arsenal confirm the signing of Thomas Partey from Atletico Madrid

The Gunners have finally landed their man

Arsenal have confirmed the signing of long-term target Thomas Partey from Atletico Madrid.

Mikel Arteta's side were admirers of the Ghanaian star for a long time, but previously baulked at the asking price. However, Arsenal activated the Atletico Madrid star's €50 million release clause, which paved the way for his move to the Emirates.

Welcome to the Partey! 🥳

Arsenal have long been looking for some additional steel and dynamism in their midfield, which Partey possesses in ample amounts.

In particular, he is known for his high energy and range of passing.

Journalist Fabrizio Romano earlier tweeted that Arsenal were close to signing Partey for £45 million. His medical was initially believed to be occurring in Spain, but the Gunners instead flew him in to London to speed up the process.

Atlético Madrid board have received the notification 1 hour ago from Arsenal for Thomas.#AFC are set to trigger the release clause for €50m tonight, race against time then... here-we-go ⚪️🔴 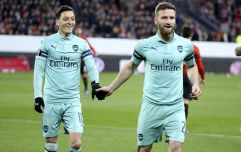 END_OF_DOCUMENT_TOKEN_TO_BE_REPLACED

As a result of Thomas Partey moving from Atleti to Arsenal, Uruguay star Lucas Torreira will move in the opposite direction to the Wanda Metropolitano.

Torreira's move will be a season-long loan deal. Personal terms have been agreed between the two clubs, and the former Sampdoria man completed his medical a few days ago.

Torreira has never quite fulfilled his potential, with Arsenal turning their attentions towards Partey as a partner for Granit Xhaka in defensive midfield.

It's been a hectic transfer deadline day at the Emirates.

Arsenal earlier allowed French midfielder Matteo Guendouzi to join Hertha Berlin on a season-long loan. The Gunners raided Hertha for 18-year-old Omar Rekik, who they are bringing into Arteta's squad for around £1 million.

Omar Rekik (18) joins from Hertha Berlin for a fee in the region of €1m, as reported by @RikElfrink.

Nikolaj Duus Möller (18), signs from Swedish side Malmo for around €500k, as per @JohanFlinck. pic.twitter.com/x72iMvx5hi

Rekik will officially become an Arsenal player on January 1st, 2021.

Thomas Partey began his career in his native Ghana with Odometah FC, before joining Atletico Madrid's academy setup in 2011. He made his Atleti debut in 2015, and was part of the squad that defeated Marseille 3-0 in the 2018 Europa League final.