They've got 99 problems but commercial partnerships are not one

Arsenal announced the partnership today; in a statement the club said: "We’re delighted to launch a new partnership with global music and streaming platform TIDAL that celebrates our shared commitment to developing young talent."


Through this new partnership, Arsenal fans who have bought Platinum or Gold memberships with the club for next season will be granted a free six month subscription to TIDAL's hi-fi service, while Silver and Red members will be given access to the Premium service . 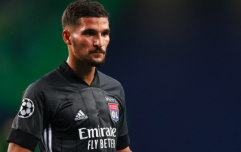 END_OF_DOCUMENT_TOKEN_TO_BE_REPLACED

There are more than 50 million songs available to stream on TIDAL, which as founded by Jay-Z and a cohort of other musicians, including Beyonce, Kanye West, Rihanna and Usher, as a competitor to Apple Music and Spotify.

Jay-Z's support for Arsenal is clearly no joke. The New York born hip-hop artist has been spotted at the Emirates many times with other musicians such as Chris Martin.

Rihanna, another TIDAL founder, was recently given a tour of the stadium and met several first team players after Arsenal's 5-1 win over Everton back in February.


popular
QUIZ: Can you name every top European football club that begins with 'L'?
The JOE Friday Pub Quiz: Week 210
Protestors and police officers injured at anti-lockdown protest
Netflix has just released a must watch Jose Mourinho documentary
Manchester United score penalty after full time whistle in 3-2 win over Brighton
QUIZ: Can you name these managers' first signings?
A definitive ranking of every swear word from worst to best