Alexis Sanchez's time at Arsenal appears to be coming to an end.

The Chilean forward has been linked with a transfer away from the Emirates for months, he has entered the final 12 months of his contract and there are no sign of talks for a new deal resuming. Sanchez's body language in games has suggested he would rather be almost anywhere else than playing for Arsenal.

The former Barcelona forward looked particularly pissed off during Arsenal's 4-0 defeat on Sunday. He regularly threw his arms in the air when teammates made mistakes and, when substituted, sat on the bench looking bemused at what he was witnessing.

Sanchez clearly wants out of Arsenal, but the club have rejected a bid for him.

On Tuesday, it was reported that they had turned down a £50m offer from Manchester City for the 28-year-old. There were also reports that Arsenal would be prepared to make a deal if City offered cash plus Raheem Sterling for Sanchez.

However, with one day to go before the transfer window closes, the Chilean is still an Arsenal player. 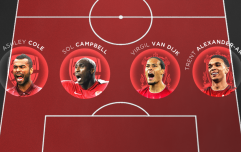 END_OF_DOCUMENT_TOKEN_TO_BE_REPLACED

Most Arsenal fans don't want him to leave, and elements of the football media are adamant that the club cannot afford to lose the player to a rival. Yet, it seems some members of Arsene Wenger's squad want Sanchez to leave before the transfer window closes on Thursday night.

According to The Telegraph's Matt Law, Arsenal players are "fed-up" with the forward.

"The majority of the first-team squad have now had enough of Sanchez and the saga regarding his future. They believe he has no desire to be at Arsenal and has been allowed to get away with putting himself ahead of the team for far too long."

Members of Arsenal's squad also feel the transfer speculation surrounding Sanchez has had a "detrimental effect" on them and it will continue to do so while his future remains uncertain. The Telegraph report that the "bad feeling" between Sanchez and the Arsenal squad has been present for quite a while.

Sanchez was reportedly involved in a training ground row back in March, and members of the squad are said to have confronted him and questioned his attitude. So, while fans and media are preaching the importance of keeping Sanchez, it seems like some members of the Arsenal squad won't shed any tears if he departs.

The latest report also contains a brilliant line, which reads:

"Sunday's 4-0 thrashing at Liverpool convinced many members of the Arsenal squad that the club need players who are fully committed to the cause."

Looks like they'll need a lot of new players then.