The Gunners have lost their last four home games

Arsenal fans are calling for ex-Spurs boss Mauricio Pochettino to take over from Mikel Arteta at the Emirates, after the Gunners suffered another embarrassing defeat.

END_OF_DOCUMENT_TOKEN_TO_BE_REPLACED

The Gunners lost 1-0 at home to Burnley.

Eager to hit back after last week's defeat in the North London Derby, Gunners boss Arteta named a strong lineup. Well, at least on paper.

Arsenal couldn't make their superior possession count, however. They squandered a number of chances to truly test Nick Pope in the Burnley goal.

Pierre-Emerick Aubameyang heads in at the wrong end to open the scoring! 😬 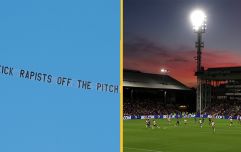 END_OF_DOCUMENT_TOKEN_TO_BE_REPLACED

Mikel Arteta's side had 18 shots on goal, but only six hit the target. Burnley had just 35 percent possession, but that mattered little with the home side so profligate in front of goal.

Arsenal's cause was greatly hindered by the dismissal of Granit Xhaka just before the hour mark. The Swiss international was initially booked after a tussle with Burnley midfielder Ashley Westwood, but that yellow card was upgraded to red after a VAR review.

Xhaka could clearly be seen grabbing Westwood by the throat, and so was sent off for violent conduct. 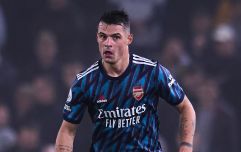 END_OF_DOCUMENT_TOKEN_TO_BE_REPLACED

Burnley left the Emirates Stadium with all three points when they got the game's only goal in the 73rd minute. Arsenal striker Pierre-Emerick Aubameyang headed a Burnley corner into his own goal.

Some of the Arsenal fans in attendance couldn't watch - literally.

Current mood for Arsenal fans at the Emirates...⬇

As the final whistle went, there were audible boos from the small number of spectators allowed into the stadium.

A large number of those watching at home directed their anger towards manager Mikel Arteta. Many earmarked former Tottenham boss Mauricio Pochettino as the man to take over at the Emirates.

I really wanted Arteta at Arsenal to work but it’s all going horribly wrong. It’s just terrible football and the players look uninterested. And then you have Pochettino sat at home. Too early? May?

The Pochettino to Arsenal plot twist NO ONE saw coming

Not everyone laid the blame at Arteta's door, though.

Speaking after the game on Sky Sports, ex-Man Utd defender Patrice Evra sided with the Arsenal manager. Evra said the players are the ones to blame.

"There is a lack of discipline about Arsenal, and Arteta must be fuming right now," said the Frenchman.

popular
Incredible case of the only known individual whose parents were two different species
TikTokers are utterly convinced there is a secret zombie apocalypse going on in China right now
Time traveller’ claims to know exact date Queen will die
Women need to be dating men 10 years older than them, says relationship coach
Darius Danesh opened up about his health struggles before his tragic death aged 41
Jealous man glued wife's vagina shut as he caught her cheating with four men
People compare reaction to Tommy Lee's explicit post with the scrutiny Britney Spears is facing
You may also like
Sport
Fans divided over Arsenal's pink third kit that 'looks like pyjamas'
Sport
Pep Lijnders claims Premier League rival tried to poach him from Liverpool
Sport
Gabriel Jesus slams former teammate for ‘talking s**t’ to him during Arsenal friendly
Sport
Mohamed Elneny 'will coach Arsenal' after he retires, says his father
Sport
Ex-Arsenal and FIFA legend Gervinho still going at 35 as he agrees to joins new club
Next Page