Conte endured a frustrating night back on his old stomping ground 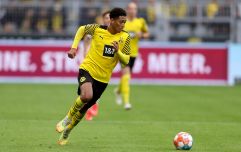 END_OF_DOCUMENT_TOKEN_TO_BE_REPLACED

Juve secured their passage to the final with a goalless draw in Turin, having won the first leg 2-1 in the San Siro - much to the annoyance of Conte.

The 51-year-old, who spent the bulk of his playing career at Juventus before managing them between 2011 and 2014, reportedly directed a middle finger gesture at Agnelli during half-time.

Italian outlet RAI reported that the Juve chief retaliated at full-time, racing down steps from his seat to shout at Conte: "*** off, shut up you a***hole."

Asked about it after the game, Conte refused to divulge too many details - though did suggest the blame lay with his former employers.

"Juventus should tell the truth," he told RAI 1. "I think the fourth official heard and saw what happened throughout the match.

END_OF_DOCUMENT_TOKEN_TO_BE_REPLACED

"They should be more polite in my opinion. They need more sportsmanship and respect for those who work."

Specifically asked about the exchange with Agnelli, the former Chelsea boss opted not to go into detail.

"What happened at the end of the game? I have neither the desire nor the pleasure to comment on anything. I think that in all things there must be education. Enough."

Having exited Europe before Christmas, Inter will now focus on the league. They currently sit in seconds, two points behind neighbours, AC Milan. Juventus are five points behind Inter in third, but can close the gap to two by winning their game in hand.

popular
Man knocked out in single punch by ASDA security guard and dragged across floor by his hoodie
Gordon Ramsay hits back at radio host for 'fat-shaming' daughter Tilly
Influencer criticised for photoshoot at her dad's funeral
Average number of sexual partners in UK revealed
UFC star Paddy The Baddy explains why he's 'Scouse not English'
John Lewis ad featuring boy in dress has been banned
Mum and boyfriend arrested after three children found living next to remains of eight-year-old brother
You may also like
Sport
Giorgio Chiellini aims Dybala dig at Cristiano Ronaldo
News
Paul Pogba posts tribute to Juventus player Bryan Dodien after his death
Sport
The case for and against Man United signing Cristiano Ronaldo
Sport
Cristiano Ronaldo ‘says goodbye to teammates’ ahead of proposed Man City move
Football
"When you play for Man Utd you don't go to Man City": Solskjaer's press statement on loyalty resurfaces
Next Page