France. Fortnite. Barça. In that order.

He's not quite reached Gareth Bale levels 'country over club' yet, but Antoine Griezmann increasingly looks like a man who waits for the international breaks.

It is with France, after all, that he has reached the pinnacle of the game, winning the World Cup in 2018. At club level, he has won the Europa League with Atlético Madrid and has just endured a tough, barren debut season at Barcelona.

Griezmann scored the opening goal in France's 2-1 win over Croatia on Wednesday night, playing centrally in a front three alongside Anthony Martial and Kylian Mbappé, who played wide left and wide right respectively.

This system affords Griezmann the freedom to play as a false 9 and drop into pockets of space, and link up play with the wide forwards, both of whom can be deployed as orthodox strikers.


Following the game, Griezmann was full of praise for his national team coach, Didier Deschamps, highlighting the position he is deployed in for Les Bleus. 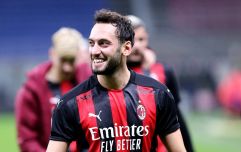 END_OF_DOCUMENT_TOKEN_TO_BE_REPLACED

"Deschamps knows where to put me, so I take advantage of the situation, this position, and the confidence of the coach and my teammates," Griezmann said after the game.

At face value, this can be interpreted as a simple compliment to his manager with whom he enjoys a healthy relationship, but in the context of his troubled position at Barcelona, it is clear that there is some resentment towards Barcelona manager Ronald Koeman buried in those comments.

Last season the Frenchman struggled to break into the starting XI at the Camp Nou despite arriving for £107 million. Former manager Quique Setién openly admitted he "did not fit the system." Which, to be fair, he didn't, but why buy him in the first place if that's the case?

This season, he has been playing more football, but often starting on the right, while Messi occupies the central position in the forward line.

Are you listening, Ronald? Play him through the middle.