David Haye might be less than a year into his comeback, but he already has undefeated heavyweight Anthony Joshua in his sights.

Speaking to JOE ahead of Saturday's fight against Arnold 'The Cobra' Gjergjaj, Haye says he believes he'll be ready to take on his compatriot as soon as next year, so long as he keeps winning in the meantime.

"Whether it’s the beginning, middle or end, I don’t know," Haye admits.

"It’s more down to his side, to be honest, but I think realistically a fight between me and him would be 2017. It’ll be a huge, huge fight - whatever month of the year, it’ll be huge."

Now 35, Haye ended a three-and-a-half year hiatus from boxing with a 131-second knockout of Australian Mark de Mori in January.

Since stepping up from cruiserweight in 2009, the two-weight champion has been used to fighting once every 18 months, but a new training regime under Shane McGuigan has helped him prepare for more fights in a shorter space of time.


The current set-up is designed to let him get back into training within 2-3 weeks of a fight, and victory over Swiss opponent Gjergjaj - who goes into the bout 29-0 with 21 knockouts - would potentially bring about a September meeting with veteran former world heavyweight champion Shannon Briggs. 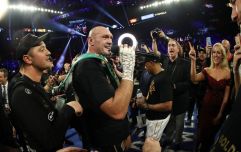 This is Tyson Fury's Guide to Self-Belief

END_OF_DOCUMENT_TOKEN_TO_BE_REPLACED

"I’m focusing more [in training] on injury prevention and doing a lot more punching than I did before." Haye explains.

"Less hard, dangerous sparring - so I stay rejuvenated and stay fresh and am able to go back into training after a fight. I’ll have a little holiday then in 2-3 weeks get back into it."

After such a long period away from the sport, there seems to be an onus on Haye to do it all again. His cruiserweight and heavyweight titles don't have the same sway they used to in some circles, particularly after twice pulling out of scheduled bouts with Tyson Fury earlier this decade.

Unified heavyweight champion Fury has vowed to never fight Haye following the two cancellations, prompting the Londoner to claim Fury is running scared, but Haye does accept he won't get a big fight right away.

"I need to keep winning, and keep winning impressively, then the big fights will happen," he acknowledges.

"I’ve been there before, I’ve been a contender and worked my way to the top before. I’ve done it many times at two different weights, so I can do it again."

David Haye takes on Arnold ‘The Cobra’ Gjerjaj at The O2 on May 21. Watch #HayeDay exclusively live and free-to-air from 8pm on Dave, for tickets visit theo2.co.uk


popular
How many times can you see the number 3 on this iPhone screen?
PlayStation and Xbox users will now be able to play against each other online
QUIZ: The hardest Gavin & Stacey quiz you'll ever take
A point-by-point breakdown of the most savage act of betrayal in the history of TV
A definitive ranking of every swear word from worst to best
Here's how to recover all your deleted Facebook photos and messages
Not sure which NFL team to support? This quiz will help you make your mind up

You may also like
Entertainment
Anthony Joshua breaks down his favourite boxing movies
Entertainment
Can a WWE wrestler and boxing champion learn from each other?
Sport
Despite appearances, Joe Frazier hated Muhammad Ali until the very end
Sport
Carl Frampton reveals his X Factor audition during training camp
Sport
Tyson Fury's cut against Otto Wallin a wake up call ahead of Wilder rematch
Next Page